THE MAN IN THE SNOW BY RORY CLEMENTS 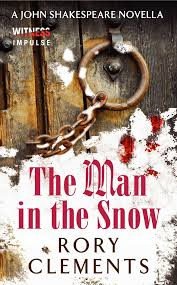 John Shakespeare has been asked to inquire about the death of Giovanni Jesu an "Ethiop" found shot and stripped naked in the snow. It is discovered that Giovanni was brought over by the Earl of Oxford some years back and while many others who had long since gone away, Giovanni had remained with the Earl.
There were many rumors surrounding Giovanni's relationship to the Earl. Many presumed he was kept because of his great beauty. The Earl of Oxford, once a favorite of the Queen has now lost most of his fortune and is more often than not drunk. But, John must visit with the Earl and find out what he knows about Giovanni. His investigation will lead him to discover that Giovanni may have been leading a double life and his lover, a young woman who recently gave birth to his child, may be in grave danger. Will John find out the truth before someone else is murdered?

For a novella, this mystery has quite a bit going on. The question of the Earl's sexual preferences, his religious leanings, and those who are sure he is guilty of something is the motive behind employing John to look into the murder. With Christmas upon them, no one wants to be questioned about a murder or have the death hanging over them. So, John is under pressure to wrap the case up quickly. He enlist Boltfoot to do a little investigating as well in order to get a clearer picture of what Giovanni may have been into before his death.

A solid outing in the John Shakespeare series. A quick, but absorbing mystery, perfect for curling up with next to the fire on a cold night.

This one gets an A.