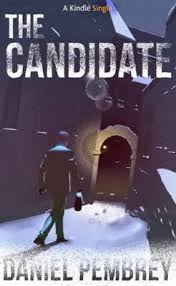 The Candidate by Daniel Pembrey is a Kindle Single released in 2013. I received a copy of this book from the publisher and Netgalley in exchange for an honest review.

Nick Thorneycroft wakes up one morning with a massive hangover and finds a pair women's panties in his apartment. He has no memory of what he did the night before or with whom.
Going into work, he is tagged as the person to help snag an up and comer to become the VP of the company, which may be on the verge of a merger.
Kate Novakavich is stunning. Nick feels some sort of connection to her as he parades her around from interview to interview.
Meanwhile, Nick deals with his girlfriend/ex-girlfriend calling him and texting him in panicked demeanor that leaves him with a sense of dread.

Set in Luxembourg, the political climate in Russia, with election campaigns going on, sets the backdrop of this tense thriller involving spies, double crosses, politics, and a little corporate wrangling.
Nick gets sucked into the vortex unwittingly and gets the shock of his life as a result because no one can be trusted.
The story is atmospheric, leaving a chill in our bones thinking of the climate. The landlords are odd, Nick friend and co-workers all behave paranoid and on edge. The "Candidate" is also rather aloof and never seems to answer a question directly.
Novellas and short stories can be tricky to pull off. Sometimes it works out great and sometimes not so much.
This one falls in between. I was engaged and the story really held my attention, but then it just stopped. We don't know what takes place after it finally clicks in Nick's brain what has actually happened.
So, we know the set up , we know the players, we know the motives, but we don't get to find out what the total outcome will be after all is said and done.
It could be a good idea for the author to pick this story up at some point and make it into a series of Kindle series, or use this one as a prelude to a full length novel.
The writing was fine. I just wish the story had been a little longer without the sudden stop at the end.
Overall a C+