MISTRESS OF RAGHERY BY RAINE ENGLISH 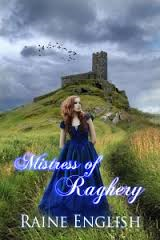 The Mistress of Raghery by Raine English is a 2013 Elusive Dreams Press Publication. I received a copy of this book from Netgalley and the publisher in exchange for an honest review.
Sheeva Desmond, penniless and homeless, is set to marry Cedric. However, on her wedding day, Cedric fails to appear for the ceremony. When Sheeva, running down the road in her wedding gown, is nearly ran over, it is mistaken for a suicide attempt.

Ronan Quinn takes Sheeva back to his home on Rathlin Island, Ireland to recover from the accident. He is informed of her situation and it is suggested that since the girl has no where else to go, she might be good as a governess for his son, Irial. Irial witnessed the mysterious death of his beautiful mother, Catherine, and hasn't spoken a word since.
Sheeva accepts the job and begins to work at taming the child who has been running wild without much adult supervision. She also must cope with the growing attraction between herself and Ronin. But, Ronin refuses to act on his feelings for Sheeva. He has sworn that after his failed marriage with Catherine, he would never marry again.
Sheeva also must deal with the ghostly apparition of Catherine and a feeling that she can't shake that something terrible happened to Catherine. There are whispers about the possibitiy of murder, while most think it was a tragic accident and still others wonder if she took her own life.
Sheeva is determined to find the truth, convinced it is the key to Irial's recovery. But Ronin isn't happy about it because Sheeva roams around in dangerous areas where smugglers have been known to hide out.

This Gothic mystery and romance set in the 1800's Ireland feels like a tribute to the classic Gothic novels that were so popular in this period of time. There are ghostly apparitions, a lady's maid that worked for the late Mistress of Raghery and is still staunchly loyal, a possible murder mystery, romance and danger.

The author did a great job of paying homeage to the genre and creating her own style at the same time. I really enjoyed this one.
Overall this one gets an A.