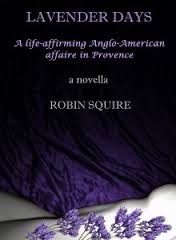 Lavender Days: A life-affirming Anglo-American affaire in Provence by Robin Squire is a 2013 Greenwave Editions publication. I received a copy of this book from the author in exchange for an honest review.

Gabriel Reeve had viewed relationships has a hassle until he began to think his work was being affected by too much time in isolation. He began a quest to get out and meet women, but found it to be daunting. This led to a magazine article in SHE magazine he wrote venting about meet and greet dating services. The article caught the attention of an American woman with an adolescent daughter. She decided to contact Gabriel and the two decided to meet.

Thus began a torrid two week affair in France. Kathryn and her daughter Jodi quickly embedded themselves in Gabriel's life. But, Kathryn is bent on having an affair with a rich French lover and soon makes her choice between the rich man and Gabriel.

This all takes place back in the early 1990's. Now years later, Gabriel climbs up into his attic on an entirely mundane errand and stumbles across some old mementos and journal pages from the time he was involved with Kathryn.
In the beginning he is amused by his younger self and maybe a little embarrassed. As he continues to read the journals and breathes in the scent of lavender placed in the bag with all the notes, his memories come back to him all too vividly.
At times he almost feels like an intruder into someone else's life. He barely even recognizes himself in these writings.
As the memories began to flood back in great detail, Gabriel begins to wake up as if from a long sleep. This one afternoon brings back to him the time in his life when he felt the most alive, when he almost had in his grasp the thing he most needs, only to somehow find it just outside his grasp. But, this day will change that for Gabriel as he decides he has been asleep far too long and it is time to take charge of his life and the love of his life as well.

This book has a basis in fact. The article that appeared in SHE magazine was real and was reprinted here in the novel. (with permission, of course)

The story deals with a highly sexual affair between Gabriel and Kathryn and the story is somewhat erotic. I don't mean there is extreme graphic sexual content, but this for Adults only.
This relationship is like no other for Gabriel. He is at Kathryn's mercy from the get go. He even comes to feel a bond with her daughter, very much like a father would a daughter. But, Kathryn is still unsure of what it is she wants. She feels that her daughter's future would be better served if she were to seek out a man of some social status and with an ample bank account.
But, she does care for Gabriel and never really leads him to think they have a chance at a long term romantic relationship.
Over time Gabriel buries the memories of that two week period deep into his self conscience. He is stunned by the force of them when they begin to return with the help of his discovery in the attic.

A very compelling story, well written and visual. It was hard for me to form a like or dislike with some of the characters. I felt Gabriel gave up too easily and let Kathryn just go with out a fight. A realization that hits him in the present day, enough to want to right that wrong.
Kathryn was also just all over the place, seemingly playing a game with Gabriel and knowing full well how deeply he felt for her. The most likeable character was Jodi who seemed the most effected by the decisions her mother makes.
A nostalgic feeling will grab you as you too may remember an intense love affair or can imagine one like this one and finding evidence of this time causing you to relive the highs and the lows all over again, leaving you with a bittersweet taste in you mouth.
Will Gabriel find his lost love?

I would recommend this to fiction/literature fans and romance lovers.
This one gets an A.