KISSES, SHE WROTE by KATHERINE ASHE 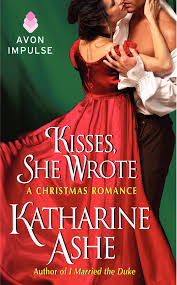 Kisses, She Wrote (The Prince Catcher, 1.5) by Katharine Ashe is a December 2013 Avon Impulse publication. I received a copy of this book from the publisher and Edelweiss in exchange for an honest review.

Princess Jacqueline is a plain, quiet wallflower that should have been married before now, but her brother has shirked his duty in that area. Now the queen has demanded that the princess marry at Christmas.

Cam Westfall, the Earl of Bedwyr is a notorious rake. He also has his good points, like rescuing a woman from an abusive husband and becoming the guardian of her daughter after she dies.

Cam and Jacqueline are not all that interested in marriage, but both of them find they are about to be forced to marry people they don't care one wit for whether they want to or not.

But, when Cam happens upon Jacqueline's diary, he is stunned at the erotic and sensual language written in it. Every chance he gets he reads a little more of the diary. He also spends as much time as possible with the diary's owner.
Jacqueline and Cam become very good friends. Cam loves her forthcoming nature. But, he finds himself feeling something else as well. A feeling in his chest he has never experienced before.
As a result he finds he is able once more to put pen to paper and write some of the most stirring poetry.
But, his poetry tells a story that keeps the feelings between himself and Jacqueline alive. Is their love story doomed to remain on the written page or will they find a way to really be together?

I loved how the romance proceeded from a genuine enjoyment of one another's company to friendship to falling in love.
This story is a sigh worthy romance.
Overall this one an A.