I was interested in conveying a mood of the times, and much of that – you might call it research – I derived from books I had read. Timothy Findlay’s The Wars and Joseph Boyden’s Three Day Road helped paint the trenches for me, along with All Quiet on the Western Front. Paris 1919 by Margaret MacMillan was an enthralling explanation of the aftermath. Those were just a few. I had to do a bit of technical reading on tunneling, but none of that was as laborious as my struggles with French cuisine. They take their food seriously! Even one hundred years after the plates have been cleared away, I was being given lessons on rural stews that I’m not likely to forget.

I find history fascinating. I don’t know if that makes me a buff, though I rather think not. I’m not the sort to obsess about which King or President was doing what exactly on any specific day. I’m interested in how people lived, what their passions were. What was important in their lives? I’ve recently been taken with the history of the Americas around the time of ‘contact,’ and of Europe in the 19th century. I see it as a jigsaw puzzle – I try to fill in the blanks. You accumulate bits of knowledge throughout your life and travels, and the puzzle, rather than shrinking, just seems to grow. You know there is more. To me these are all stories. Stories of everywhere and everywhen. I like to get my history through novels. Usually that’s a lot more fun.

It is a problem for me. I am fortunate that my job – my paying job – lets me have time off during the week. Those days are precious. I turn off the phone and internet and close myself off from the world. I don’t find that isolation is necessary when I am editing, but when I’m putting down raw work, I need to be closeted away. A career? Perhaps one day! You should see the size of my mortgage.

I am, but I like a lot of varied stuff too. I really enjoy the atmosphere that a good Gothic book will breathe. It’s like being wrapped up tight in a warm jacket while the fog washes out round the woods. Perhaps, more than other genres, I find Gothic literature sensate. Jane Eyre walking back to look for Rochester left you standing in Thornfield. The Captain’s log of the Demeter – the ship that took Dracula to England – you could smell the ship and feel the stray and the terror of what lurked down beneath. Yet it is not merely the descriptions. You get good writing everywhere. Gothic, I believe, touches on something primal in us that I, personally, enjoy – a fear or respect of the wild and nature, an attraction to dark secrets, abundance and ruin intertwined, a fractured civilization. So yes, I am a fan.

I’m at a bit of a fork in the road. I have two things going. I started something for my kids after Malenfer was finished, but before it was published. Now that that has happened, I have put it in a drawer. I am focusing on ‘more of the same,’ the first of which is a mystery set on a remote Scottish island around about the 1920’s. A reclusive industrialist invites an assortment of characters to his estate. And bad things start to happen. I enjoy the challenge of tying characters’ stories together. Books should not be boring.

It is hard to re-read anything without putting a pencil to it. There comes a point, however, when one’s energies are better spent writing something new entirely. I am fond of the book, of course I am, but it was time to do something else. I didn’t want to fall out with the book, which can happen if you pick at it endlessly.

There is an Internet page (there is always an Internet page!) that has all of that sort of thing: http://iainmcchesney.com, and a Facebook page at http://www.facebook.com/page/Iain-McChesney/35279359481795


REVIEWS AND COMMENTS ARE ALSO WELCOME ON THE VENDOR WEBSITES TOO, AND TO BE FIRST INFORMED OF UP COMING RELEASES, YOU CAN ALWAYS SIGHN UP FOR MY PUBLISHERS NEWSLETTER:  http://epurl/com/CC9fl

I’ve usually got two on the go. I picked up Game of Thrones at an airport after I finished the other book I was carrying. How did George Martin manage to keep all those names straight? I just finished Oscar and Lucinda by Peter Carey, which was excellent. I’m after a copy of The Luminaries by Eleanor Catton – just won the Booker. Any connection? Well, all have historical settings, real or imaginary.

Oooh. That’s a tougher question than I like to admit. Society, in the West at least, has schooled us to be empiricists – scientific method, all of that – and I am not adverse. Have I seen a ghost of my own? No, not yet . Have I spent sleepless nights in ‘haunted’ houses – Carbisdale Castle in Sutherland being one – oh, yes, and I’ve got the grey hairs. I spent a year on the Hindu island of Bali where local spirits are given offerings every day, and I know perfectly rational people who swear they have felt ‘the others’ themselves. What do I believe in? That the world is a far more interesting place where spirits and ghosts are in residence.

I don’t play favourites, but there was one by Mark Twain that seems more pertinent now than it did before The Curse was published:

"Well, my book is written – let it go. But if it were only to write over again there wouldn't be so many things left out. They burn in me; and they keep multiplying; but now they can’t ever be said. And besides, they would require a library – and a pen warmed up in hell." 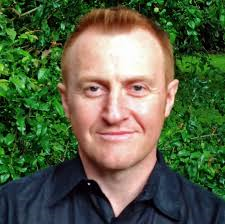 Here is a photo of the wine charms in the giveaway. WINE GLASSES NOT INCLUDED!
a Rafflecopter giveaway 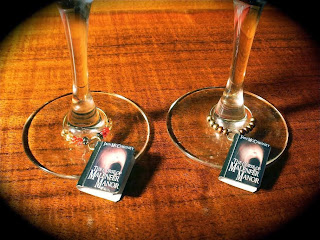