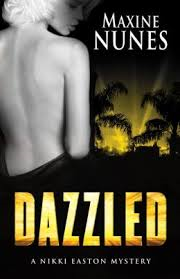 Dazzled by Maxine Nunes is a November 2013 release published by Five Star Mystery a division of Gale/Cengage. I received a copy of this book in exchange for an honest review.

Nikki Easton's best friend is MIA. Something is off and Nikki is very concerned about her friend. Nikki's worst fears come to fruition when the body of a badly beaten woman is found.

But, Nikki can't get the idea out of her mind that the unrecognizable dead women is not Darla. This idea gets the attention of a detective who visits Nikki to discuss the case.

Nikki decides she will go solo and see if she can find out what really happened to Darla.

This mystery novel has the feel of old Hollywood noir, but in present day. A myriad of sleazy characters and off beat personalities with plenty of motive and lots to hide keep Nikki on edge and in danger as she gets closer to the truth about what happened to her friend.

There are lots of twist and turns and sub-plots that keep the reader engaged. I read this book in one sitting. I couldn't help thinking this book would translate well in a TV movie. Nothing overly heavy or profound, but an entertaining mystery that kept me guessing all the way to the end.
This one gets an A.


1) Why did you decide to become an author?
Well, like Nikki, I originally started out acting. Directors weren’t exactly falling all over themselves to hire me — but people kept paying me to write. So I’ve been a pen for hire most of my life. But Dazzled was different. I wrote it purely because I love fiction, not because someone wrote me a check. Of course, once it was finished, I was awfully glad it sold.
2) How long have you been writing?
I was one of those kids was always writing little stories, then tying them with brightly colored wool to make into “books”. Then, when I was 10, I shocked my fourth grade teacher with a “Summer Vacation” story that ended with a family being wiped out in a car crash — which actually happened to our neighbors. The teacher called me over to her desk, and she was very upset. She told me never to write anything like that again, so I thought she’d flunked me. Then I saw the “A.” I think that was the moment I first thought maybe I really could be a writer.
3)  In DAZZLED, Nikki has a knack for crime solving. Will she return for more “adventures”?
Absolutely! Her acting career is going to take her on location all over the world — Paris, New York, Lisbon, the interior of British Columbia. Places I’ve either lived in or have a strong connection to. And since I like to do first-hand research, I’ll definitely be travelling with her.
4) Are you a mystery novel fan yourself? Who is your favorite mystery novelist?
Totally. A huge mystery fan. For me the gods are Sir Arthur Conan Doyle and Raymond Chandler. And there are two contemporary writers I really love. One is Benjamin Black (the pen name for Man Booker Award Winner John Banville. The other is Megan Abbott. And for good mystery comfort food, maybe a Walter Mosley audiobook.
5)  What other types of books have you written?
A very long time ago, I was hired to write 10 romance novels. Each paid a flat rate that just about covered my rent, so I had to write one a month. I think that was the most fun I ever had writing anything. There was no time to worry and obsess over details — I just plunged ahead. And whatever those books lack, they are entertaining and have tremendous energy. I also wrote the novelization of a Dennis Hopper/Jodie Foster film, Backtrack (aka Catchfire), for Simon & Schuster. But the film wasn’t released until years later, and the book was only published in translation in Germany. I also co-wrote a non-fiction book, What’s Really Wrong With You, which explains in laymen’s terms how muscles affect your health.
6) How do you like to spend your spare time?
Oh, gosh. What spare time? But I do try to carve out little pockets of it. I try to work out or walk or hike at least a few times a week. And I love to jump in the car and take off for a day trip or a weekend when I can — but I usually need an excuse, like research for a book or an article assignment. And, when I’m brain dead from jamming on deadlines, I do veg out at night and watch TV. There’s actually an awful lot of brilliant work on the air now. And, okay, I love Project Runway, too. Those designers aren’t so different from writers – only watching writers sitting around in sweats, typing, tearing their hair out and staring into an empty fridge would probably not make the most exciting TV.
7)  Where can readers contact you? Where can we buy your books?
You can email me at max@maxinenunes.com. Dazzled is available in both hardcover and Kindle editions on Amazon — and at independent bookstores too.
8)  What are you working on now?
Nikki’s acting career will take her on location, and I’m working on two now, one that will take her to Paris, and another home to New York.
9)  Physical books or e books?
When I first got a Kindle a few years ago, I was totally over physical books. But now I find myself drawn to them again. You know, a friend called me the other day because her copy of Dazzled had arrived. And she kept saying, “I love the way it looks, I love the way it smells!” And that’s it… there’s just something so intoxicating about the physical experience of a real book. If only they had a Search function!
Coffee or Tea?
Chai lattes. Seriously addicted. Can’t start writing without one.
Dogs or Cats?
Dogs. Though cats are pretty fascinating.
10) Do you have a quote you would like to share?
“Everything you know is wrong.” It’s from an old comedy show called Firesign Theater.  It was their comic/ironic slogan, but the playing field is always changing on us, isn’t it? I think that’s why we love mysteries.

Maxine Nunes is a New Yorker who's spent most of her life in Los Angeles. She has written and produced for television, and currently writes for several publications including the Los Angeles Times. Her satiric parody of a White House scandal won the Pen USA West International Imitation Hemingway Competition. Dazzled is her latest release. Learn more at:
http://www.maxinenunes.com/
Facebook URL: https://www.facebook.com/maxine.nunes
https://www.facebook.com/DazzledMystery