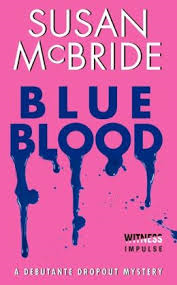 Blue Blood by Susan McBride is a William Morrow publication. This book was provided to me by the publisher and Edelweiss in exchange for an honest review. This book was originally published in 2004 and now available in digital format.

Andrea, "Andy" met Molly in college. Andy comes from the affluent Highland Park area in Dallas and Molly was on scholarship. The two girls forged a bond, but Molly's life became complicated when she had an affair, got pregnant and had to leave school. Now working in at a popular restaurant "Jugs", Molly is the target of one of the owners. One night he attacks her and she fends him off, scarcely escaping rape. When her attacker is found murdered, Molly is arrested for murder. She calls her old friend Andy for help.

Andy has turned her back on the Junior League lifestyle, much to her mother's dismay. When Andy begins playing detective to help her friend Molly and her son, Cissy gets involved too, but may have an ulterior motive.... like match making with the attorney they hired for Molly.
When Andy takes a job at Jugs, she uncovers a hoard of secrets. Another girl had also had an unpleasant experience with the deceased and she just dropped off the face of the earth, and the guard on duty the night of the murder is now in a coma after an attempt on his life. Something just doesn't add up. Toss in a religious group protesting Jugs and their exploitation of women and you get an outrageous murder investigation.
Money, sordid affairs, and blackmail round out the sins and crimes surrounding Jugs.

While this first book in the Debutante dropout series is a little aged, with references to VCR's, and a few other things we have long since forgotten about, the story is wonderful. A light, chick lit, cozy mystery with laugh out loud moments and just a little bit of romance. For me, part of my pleasure came from recognizing the area the author spoke of. I live a few hours from DFW now, but I am fairly familiar with these areas. I could really imagine the "Cissy" character and I knew the eateries she spoke up and so on. (I'm not Highland Park material, but we know about them due to a high school football rivalry)

I am so glad this series is now in digital format. I recommend this book to romance lovers, mystery lovers, and women will enjoy it especially. Overall this one gets an A.