BACK TO LIFE BY DANIELLE ALLEN 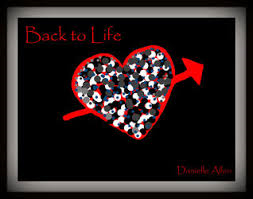 Back to Life by Danielle Allen
I received a copy of this book from the author in exchange for an honest review.

Sahara wants to celebrate the end of her exams and convinces her best friend, Emily to go out to a party with her. After having a few drinks the girls call Emily's brother, Emanuelle, to pick them up.
What happens that night changes Sahara's life forever. Now ten years later, Sahara is living one day at a time, her main goal is her job and keeping the terrible pain and memories at bay. She has no friends, no lovers, lives alone. She uses her ipod and her playlist to keep the panic attacks and bad thoughts away.
But, sometimes you just can't run far enough away. Sooner or later you have to face things and that time has come for Sahara. A letter she receives sends Sarhara's fragile emotions into a tailspin.
Unable to sleep, Sahara goes to the gym and meets a really great guy named Tyree. Sahara feels she is toxic to anyone who gets close to her. She tries to avoid getting involved with Ty, but the atrraction is just too strong.
But, when Sahara is forced to return to her hometown, she realizes she had misjudged the people she thought she had wronged. Face to face with those she left behind, Sahara is now confused about her feelings. But, Sahara could never imagine the way things would turn out. Shocking revelations come to light and Sahara will have to make one of the hardest choices she has ever had to make.
This is a really emotional story. I can not imagine what Sahara must have been going through. I could understand Sahara's feelings totally. I also tend to react to major life changes the same way. Sahara blamed herself for something that was not her fault. She was really hard on herself. Ty helped Sahara to start living life again. She learned to love and laugh and to gain the courage to face the past. Ty was dreamy, sexy, thoughtful, and good for Sahara in many ways.
But, Sahara's past must be faced and wrongs must be righted. A little closure would have gone a long way, but just as it looks as though things will be settled for Sahara, two unexpected events could once again change things forever.
I loved the author's style of writing. This girl knows what women like to read. The clothes, the playlist, the hot guys spicy romance , along with a compelling plot makes this one of the best contemporary romances I have read in a long while.
I feel like I must tell you that this book does end with a bit of a cliffhanger. But, have no fear! The second is out right now and is called Back to Reality.
If you like contemporary romance with a little steam and emotion and heart I highly recommend this one.
This is an A+
Posted by gpangel at 4:30 PM