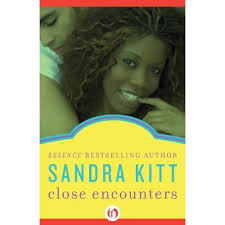 Close Encounters by Sandra Kitt was originally published in 2000. The book is being released in digital format by Open Road Intergrated Media. I received a copy of this book from the publisher and Netgalley in exchange for an honest review. This book was read as part of the Goodreads Reto Romance group hosted by Open Road media.

Carol is taking her dog for a walk early one morning and gets caught in the line of fire during a police sting operation. She was in the wrong place at the wrong time and ended up getting shot.
Lee really is an honest cop. But, he made a terrible mistake. When the ballistics test come back on the bullet that struck Carol, it proves the bullet came from his gun.
If this weren't bad enough, Carol is a young black woman and Lee is a white cop. Needless to say , that makes things much more complicated.
Racked with guilt, Lee visits Carol in the hospital and the two of them connect quite easily. But, Carol's brother and ex-husband are pushing her to sue the city. It's a slam dunk if she decides to follow through with it. But, Carol doesn't want this incident to define her life. So, she holds off of making a decision.
In the meantime, Lee and Carol begin talking to each other and more and more they feel that connection between them growing. But, will be strong enough when the world comes in to make as a couple?

This story has so many angles. This is a romantic suspence novel, a crime novel, a love story and a family drama all rolled into one. Not only that, the author raised some real issues that make this a great book for a book club read.
The obvious issues of race are addressed, an interacial couple trying to make things work can be difficult under any circumstances, but adding to that is Lee being a cop and the mistrust aimed at him by Carol's brother and meddling ex-husband.
The issues of Carol's being raised by white parents, who obviously love her and gave her a good start in life, are questioned. Carol felt loved by her parents by they seemed out of touch with how awkward she felt being different from everyone else.
Lee is dealing with a teenage daughter that is very insecure and really needs him in her life more. Watching Lee mature as a man since the incident with Carol was uplifting. Carol brought out the best in him.
Although Carol made mistakes in her life, she was a very grounded person that didn't rush to judgement and had a very open mind and open heart. She was an inspiration, a role model and someone I grew to admire more and more.
This romance is very character driven, about adults being put in stressful situations and the forces that are out of their control trying to make things more difficult, and how these people grow and become stronger. But, it is also a very sensual romance.
I can't find anything to critque in this one. A+