A CLEAR CONSCIENCE BY FRANCES FYFIELD 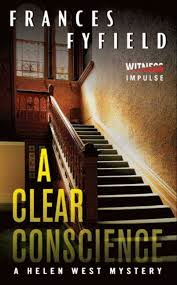 A Clear Conscience by Frances Fyfield is a Witness Impulse publication, an imprint of HarperCollins. I received a copy of this book from the publisher and Edelweiss in exchange for an honest review.

Helen West works domestic violence cases. When Helen feels she needs help keeping her house up while she does some redecorating, she calls Emily, Helen's good friend, and inquires after her cleaning lady, Cath.
Meanwhile, a murder has occurred and Bailey, Helen's boyfriend,is assigned the case. As it happens the victim was Cath's brother, Damien.

Cath was pleased to help Helen for some extra money. The two women bonded a little and then it became clear that Cath was also a victim. Her husband, Joe regularly abuses her.

Bailey gets caught in a difficult situation when he must keep certain facts about the murder from Helen.
A series of odd happenings involving Emily's daughter, Jane, has people thinking that perhaps Joe knows more about Damien's death than originally thought.

This book was originally published in 1995 and has now been released in e book format.
I love British mysteries and this one was very dark and thought provoking. Domestic violence is examined at length on more than one level. The effects this type of abuse has on the victim, the lengths one must go to escape, the selfish motives of other people, the inside thoughts of Joe, who felt he had done so much for Cath and that she owed him,(???), and the eyes and ears of children all played a role in the story.
There were a few twist in the plot, but it was really a crime story and psychological thriller.
The relationship between Helen and Bailey was also a bit unorthodox. Helen loved having a career and her independence, but was also still hard wired to think of the traditional route of marriage and children. Trying to stay true to both parts of her personality will prove to be a challenge.
Although, this novel is just a tiny bit dated, it is still a very good story and I would recommend it to mystery lovers in general, but especially to British mystery lovers. If you haven't read this author's works, this is a good one to start with. This one gets an A.