THE LAST NIGHT IN THE VIPER ROOM 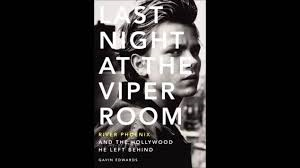 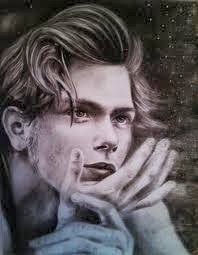 Last Night in the Viper Room: River Phoenix and the Hollywood He Left Behind by Gavin Edwards is a Harper Collins Publication and was released in October 2013. I received a copy of this book from the publisher and Edelweiss in exchange for an honest review.


IF THE SKY THAT WE LOOK UPON SHOULD TUMBLE AND FALL

"Chris Chambers was the leader of our gang, and my best friend. He came from a bad family, and everybody knew he'd turn out bad- including Chris."

That was Richard Dreyfuss, narrating as the adult Gordie Lachance, described the character in Stand by Me that made River Phoenix a star.


Last Night at the Viper Room is the story of River Phoenix. His unconventional upbringing, his real passion for music, and then fame and fortune, and death at the age of 23.

River was actually his given name. His parents were in a hippie religious cult and their kids were totally cut off from society as most people knew it. River was eight years old and still had never attended school. He never did really attend a regular school. He didn't watch television or have the experiences most of us have growing up. He adhered to his parent's strict vegan diet and was an animal rights activist.

Music was always River's first love and passion. Acting came along and he didn't take it all that seriously at first. He was his family's bread winner and acting was just a means to an end.
River always had a band going and had even carried his guitar with him to the Viper Room the night he died.

As his acting skills developed and he became more famous, it went without saying that River was heading for big things in his acting career. He really did have a natural ability as an actor. At the time of his death he was just on the cusp of really breaking loose.
But, the more money he made and the more people in the entertainment business he rubbed elbows with, the more access to drugs became available. River had maintained his clean living lifestyle up to a point. Once he started using drugs he had no control over his indulgence.

The Viper Room was a famous club on Sunset. It had weathered many changes over the years. The actor, Johnny Depp had a part ownership in the club and basically used it as a VIP club for all his famous friends. The place had a reputation for always having a full house. On any given night you could find Tom Petty and the Heartbreakers, or Timothy Leary, or members of the Red Hot Chili Peppers, models, actresses, and other entertainment personalities.

On the night in question, River was out with his brother and sister. He was given a drink by a guitarist friend and he swallowed in one gulp. He overdosed on a what is known as a speedball, the same deadly combination of cocaine and heroin that killed comedian John Belushi.

The story is a old one. Young, rich, and independent. The moneymaker for the family, and too many people looking the other way. I don't know if his upbringing or the people he knew through fame and acting were to blame for his downfall into drugs. The shocking allegations regarding the cult his parents were members of would be enough to cause severe damage in anyone. His isolation from society and constant relocation would also make it hard for someone to fit in. Having no real parental supervision, River stayed with other families, looked for a father figure on every job, and longed to be a part of something. Once people surrounding him began to suspect he had a real substance abuse problem, no one wanted to approach him about it, not even his own mother, who appeared more interested in being his manager than his parent.
The night he died, people kept saying someone should call 911. But, they were all assured River was alright, while he was have seizures every twenty seconds and banging his head against the pavement.

This young, beautiful man was just so incredibly talented and had so much promise. Despite his lack of formal education, he was so smart and caught onto things that others couldn't comprehend. Deep down in his soul, he was a good person or wanted to be. His thoughtfulness shone through even when he was out of his mind on drugs.

Anytime I finish reading a book like this, I'm left feeling not only sad, but angry and frustrated. This was a person that people should have been watching. Someone that should never have fallen through the cracks. But, no one had the courage to step up to the plate. Yes, it is said that there were some attempts at interventions, but no one really took those hard steps that you have to with a drug addict, and on the night he died, people basically stood around and watched him die, more worried about saving his reputation as an actor than saving his life.

The layout the author used to tell the story was really unique. I liked that fact that we went chronologically through River's life. It's just easier to see how things evolved that way. But, it was also interesting that the author set the stage for each chapter in River's life by reminding us of what was happening in that time in Hollywood with other young actors. Brad Pitt, Tom Cruise, Leonardo DiCaprio, Keanu Reeves, and Iona Skye. Also, the music scene was explained since River was often playing music and had a group he played with, and he was friends with Michael Stipe and Flea from The Red Hot Chili Peppers.
River's association with Johnny Depp was minor and the two didn't know each other all that well. The media played up Depp's association with the club when River died on the scene.

The author did fine job of telling this story. Again, it is always important when you take it upon yourself to write this kind of book, to not only do the research and interviews etc. But, also to keep yourself from leaning toward a certain view point. The author kept his own personal viewpoint out of the book and told the story of this young man's tragic life as it should be told.

A very compelling read, and one I recommend to all who like performance arts books, non- fiction, biographies, or are a fan of this era of entertainment or if you would just like to remember River Phoenix.

Overall this one is an A.