THE FIRST CASUALTY BY GREGG LOOMIS 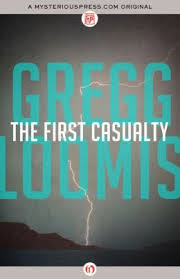 The First Casualty by Gregg Loomis is a Mysterious Press/ Open Road Integrated Media publication. The release date is scheduled for November 19th, 2013.

Jason Peters is retired and in hiding. He is trying to relax and focus on his art. But, the truth is: he's bored to death.

When "Momma" finds him and dangles a dangerous mission under his nose, he tries to fight the temptation, but of course loses the battle.

This is a dangerous mission indeed. Jason would like nothing more than to battle Al Qaeda, the people responsible for his wife's death. So, part business and part personal, Jason sets out with an unlikely crew to prevent a laser like "death ray" from shooting down Air Force One. The laser was already responsible for taking down France flight 447. This laser was inspired by Nikola Tesla who had corresponded with J. Edgar Hoover once upon a time.

This is a fast paced thriller, set in unique locations, based on some real life persons and events.

Jason Peters is a funny man is some ways. He has a penchant for having conversations with himself. He has a complicated relationship with a woman, and is torn between the rush of his work and a more traditional family life.

I have heard of the possibility that lasers can be used to target aircraft, causing the plane to crash. I have also heard of Nikola Tesla, who is a real person. The oscillator was real. Just a little food for thought.

I enjoyed this book and would recommend it to those that enjoy thrillers with lots of action and not a great deal of heavy drama and dialogue.
My only issue with the book was that it might have been too rushed in places.
Overall I would give this one a B.
Posted by gpangel at 6:17 AM