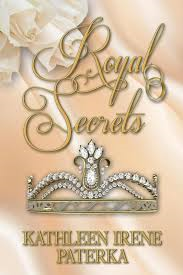 Royal Secrets by Kathleen Irene Paterka is a 2013 release. A copy of this book was provided to me by Victory Editing and Netgalley in exchange for an honest review.

Growing up in Las Vegas, Lily couldn't wait to escape her mother's wedding chapel. But, when she spends a night with her step-father's son, Jack, and winds up pregnant, instead of getting married, Lily leaves for San Diego. Now at forty years old, Lily still clings to her idea of Happily Ever After being a myth and a fairytale.
But, when Lily's daughter, Tori, runs away and heads straight for her grandmother's in Vegas, Lily must go home and get her daughter. But, when she arrives it is only to discover that her mother, Mimi, has had a serious stroke.
Now Lily must try and figure out the shape of the wedding chapel and run a business she loathes with every ounce of her being. She deals with her mother's long time friend and assistant, Francesca who is aging and not able to do as much, and with her former step-father and her daughter's father- Jack.
The Wedding Chapel, with it's history of a royal lineage, is in deep financial straights and Tori wants to restore it to it's former glory. Tori doesn't share in her mother's disdain of all things romantic. Tori, gets her mother and the chapel caught up to the present day by using social media to attract attention to it.
As Mimi begins a long recovery, Lily is anxious to return home and get back to her life. It looks as though that may not happen and she will wind up staying in Vegas to help her mother out of her debt. As a result, Lily is stunned by some shocking revelations. Her entire world shakes on it's axle.
The mother/daughter relationship between Mimi and Lily, and Lily and Tori are examined as each mother did what they felt was right at the time, and each daughter holds resentments toward their mothers. The men in their lives become exasperated with them.
Lily has held on to her cynicism or so long, it's hard for her let go and believe in something she never thought could be true. Will Lily learn to accept her mother and the way she has lived her life, and the secrets she kept? Will she and Tori patch things up ? Will Lily be open to a second chance at love with Jack?
Things don't always turn out like we planned them and sometimes decisions we make in our youth, that we thought were right, turn out later to have some unpleasant consequences. All the characters in this novel have made huge mistakes and errors in judgment in their lives and some hold grudges they have no business holding. But, in the end all the players learn from their mistakes and many wrongs are set right.
This book was hard to categorize for me. It is a romance, but not in the traditional sense. I would have to say it would fall more in the women's fiction genre than any other.
I enjoyed all the dramas and family secrets and I loved the mother/daughter tug of wars on both sides. I give this one a B+