IN TOO DEEP BY BEA DAVENPORT 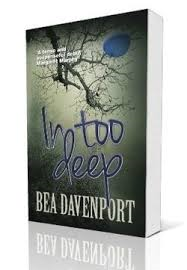 In Too Deep by Bea Davenport is a Legend Press publication and was released in the summer of 2013. I received a copy of this book from the publisher and Netgalley in exchange for an honest review.

Maura and Nick live in the small town of Dowerby. Things are underway for the annual Dowerby Fair. One of the traditions of the fair is a medieval tradition that only women are subject to and that is a dunking booth. Nick is very involved in the planning of the fair. Maura is offended by the dunking but she is just blown off by the committee.
When a young, attractive reporter, Kim Carter, moves to town, she turns Maura and Nick's conventional life on it's ear.
Maura who has never connected with the people in Dowerby, makes an instant friend out of Kim. The two of them couldn't be more different. But, Kim sees the reality of Maura's life better than Maura. Kim helps Maura get a job and begins helping to advance herself.
Maura is also the mother of a young daughter and is beginning to have a very strained marriage. Her time with Kim is most fun she sees in life.

But, Kim is not all that popular in Dowerby. She is too open minded, to unconventional, too attractive, too outspoken and too career minded. Even Maura has a hard time with Kim's lifestyle and attitudes at times.
But, when life is really looking up for Kim, a terrible thing happens and Maura feels responsible and also feels like she could be in danger. There are people, including her husband, who do not want Maura telling her side of the story.
Maura feels as though she has no choice but to go into hiding, leaving her daughter behind.

Now five years after the events in Doweby, a reporter has found Maura. Once more she finds her life turned around.

Told from Maura's point of view, we alternate between the past and the present as she tell how she met Kim, got a job, her marriage issues, and the Dowerby fair. We then fast forward to current events and Maura deals with being found by Paul, a reporter that claims to have new information that could help Maura reunite with her daughter, Rose. But does she dare trust him? Could he lead Nick to her? Was it really possible that she could be a mother to Rose again?

The writing style is very unique in this novel. The author manages to build suspense at a slow pace that keeps you turning pages, impatient to find out how Maura's life came to this point and what has her feeling so guilty and so afraid.
The witch dunking is an actual event in fairs and this tradition was based in fact. Issues such as domestic violence, small town prejudices and politics are examined. If not for these barbaric traditions and the judgments passed by the folks of Dowerby, the events that led to this terrible tragedy would never have taken place.
Thankfully, Kim's influence on Maura was long lasting and Maura could have a second chance at a productive life and career.
I really enjoyed this book. It was difficult to read some of the passages regarding domestic violence, but I loved the slow build of suspense and the way Maura finally blossoms. Maura's transformation would never have happened if not for the friendship she nurtured with Kim. While Kim was not always the most moral person, she was the best thing that ever happened to Maura. It appears that Maura also makes some new friends that will be there for her in the future.
Overall this a good solid A.