BRIDE OF A STRANGER BY JENNIFER BLAKE- CLASSIC GOTHICS COLLECTION 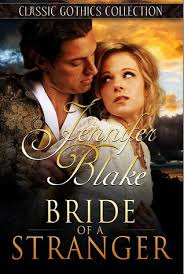 Discover new books on Goodreads
Meet your next favorite book:

Living in New Orleans, Claire has her life planned. Although there has been no formal announcement, it is common knowledge that she will marry her cousin, eventually.
However, when a dark, disfigured man of wealth and mystery sees Claire at a gathering, he makes Claire's aunt an offer she can't refuse. Claire now has no other choice but to marry Justin.

Justin was scarred as a child by a cousin, leaving him with a "C" shaped scar on his face. But, Justin runs a plantation and is wealthy and powerful with a sinister reputation. When he sees Claire, he knows instantly that he must have her.

Claire moves to Justin's plantation home, leaving behind New Orleans. Before they arrive however, there is a near fatal accident and Claire spends her first months in bed recovering from her injuries. But, she is also ill and can't see to gain strength.
Voodoo and Justin's strange family relations, keeps Claire in a nervous state, believing that someone is poisoning her and she believes her new husband is also a murderer.

Determined to keep Justin at arms length, Claire refused to accept her attraction to this man that forced her into marriage.

Written in true southern Gothic style, Jennifer Blake combines the traditional Gothic elements with the cultural history of Louisiana. Voodoo, magic, quadroon mistresses, arranged marriages, family secrets, and large plantations create the backdrop of mystery and romance.
Anyone that knows me, will tell you that if a novel has the word "Gothic" attached to it in any way, I'm all over it.
Jennifer Blake is a favorite author of mine, but I had no idea this book was out there. Thankfully, Steel Magnolia Press has re-released a sizable backlist of these books in digital format.

The more modern reader may not appreciate this type of novel, having completely missed out on the Gothic mystery/romance rage so very popular in the 1960's and 70's. Blake puts her own stamp on the genre by using the Gothic 'rules', but instead of a creepy castle or mansion, the setting is in the south on a large plantation home. But, the sinister occupants of the house with their many secrets and hidden resentfulness and motives, on top of the accurate depictions of voodoo rituals and beliefs make this take on the Gothic novel really unique.
I'm really glad I was able to get this one for my kindle. I don't know if you can still get the old paperback version anywhere, so thankfully we can still read these classics.
Overall this one gets an A.
http://smarturl.it/smp for more great novels from Steel Magnolia Press.