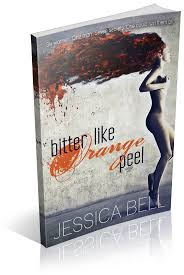 Bitter Like Orange Peel by Jessica Bell
My rating: 5 of 5 stars

Bitter Like Orange Peel by Jessica Bell is a 2013 release, published by Vine Leaves Press.

This story is told from the perspective of the wives, lovers, and daughters of one man named Roger.

Ivy's mother, Eleanor, was married to Roger when he began an affair with one of his students, Ailish. Ailish has a child by Roger named, Kit. After Eleanor's divorce, Ailish and Eleanor become friends and raise the two half sisters together as a family. Now, as adults, both girls are emotionally stunted. Ivy especially, is incapable of maintaining relationships, holding a real job, or knowing just what it is she really wants in life.
Kit is only a tiny bit better. Kit, though has decided she wants to find and meet her father, Roger. It seems that Roger had married once again and had yet another daughter. However, Kit is unaware she has another sister. None of the women seem to know where Roger is presently.
Kit's insistence on finding Roger and begging for Ivy's help in doing so, opens up a plethora of long kept secrets. They ALL have a piece to the puzzle and all have their own reasons for keeping these secrets.

These people take dysfunctional to a whole new level. How many ex-wives deliver their ex-husband's child with another woman? How many former wives/lovers are actually friends and allow their offspring to grow up together? Is it OK for one to keep a secret from the others?
More shocking revelations develop as we go along. Not only do the main characters harbor secrets, but some secondary characters are also less than forthcoming, including a guy Ivy begins dating named Brian.
So, do you have all that? It sounds like a giant soap opera, and is in a way. There is a REALLY big shocker at the end. This big reveal leaves it up to the reader how to interpret these revelations. There is no neat, all tied up in a neat bow, conclusion. We know that some people will find a kind of peace that will allow them to move forward with their lives, others will remain just as they are, most likely, and some will most likely need some professional help before it's all said and done.
Hopefully, all these women will continue to lean on each other and become closer now that some of the secrets are out in the open. But, I think maybe there is still more to be told in this story, and I hope the author will consider an update on what becomes of these characters in the future.

The author did an excellent job of keeping the reader on the edge of their seat, wondering what will happen next. It was hard to put this book down. I kept thinking about the characters and maybe was a little worried about them from time to time. If an author can evoke that sort of reaction from readers, they are a real talent. A very skillful author indeed.
A+

View all my reviews
Posted by gpangel at 1:27 PM