THE MINE BY JOHN A HELDT 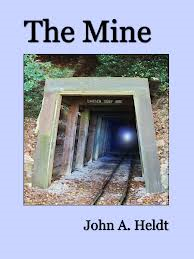 My rating: 5 of 5 stars
The Mine by John A. Heldt is a self published novel released in 2013. I received a copy of this book from the author in exchange for an honest review. Joel and his friends explore an old mine in the Seattle area, in the year 2000. While his friends go on their merry way in the mine, Joel has a bit of a different experience. He encounters a snake, then a blue glow, tripping him back into the year 1941. Joel, thinking fast on his feet, helps a guy out and winds up living with his family, and working in the family owned furniture store. He learns that his new friend ,Tom, is dating a young lady named Ginny. As it so happened, Ginny is Joel's  grandmother. Whoa! While Tom's family questions Joel's story, they pretty much mind their own business. But, Ginny isn't fooled by Joel at all. Her questions are disquieting, but she keeps her opinions to herself, only offering Joel some sage advice here and there. Quickly adjusting to all the changes in his life, he gets to know Ginny's friends and meets a girl named Grace. Grace is engaged to be married, but she and Joel have a connection. Grace struggles to understand what her future should be like. Stay will Paul or follow her heart and be with Joel. Meanwhile, Joel can't resist having a little fun with the knowledge he has about the future. Knowing the outcome of boxing matches and baseball games is too good to pass up. But, Joel also knows some darker truths about the future is hoping he is wrong.  Will Joel stay in 1941 and make the best of things? Can he ever return to the year 2000? What will happen with Ginny if he stays in 1941? What would happen to Grace in the future? I had no idea what to expect when I started reading this book. But, I certainly didn't expect this. What a wonderful story. Joel's journey to the past and the impact he has on the lives of those he encounters is incredible. He falls in love, meets his future grandmother, makes the best friends he will ever have, and faces the hardest choices he will ever have to face.  A bittersweet love story that touches the heart and will leave you with both tears in your eyes and a smile on your face. Don't miss this one. Really. I'm looking forward to the next one.
<a href="http://www.goodreads.com/review/list/5210022-julie">View all my reviews</a>