THE DRAGON'S SEDUCTION BY TAMELIA TUMLIN 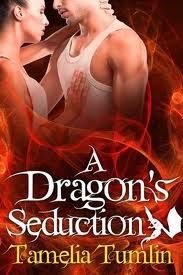 My rating: 4 of 5 stars
A Dragon's Seduction by Tamelia Tumlin is a 2012 release and published by Steel Magnolia Press. This Novella sets the stage for The Gatekeepers series. This book is about 70 pages long. Brayden is a firefighter and just so happens to also be a dragon shape shifter and part of The Gatekeepers team. When a series of fires breaks out in New Orleans, firefighters have their work cut out for them. When Brayden responds to one such fire, he is urged by a voice to hurry up and get in the building. When he finally comes across the people trapped in the building he finds they are being protected by a beautiful sorceress. Callie, only knows that Brayden is a firefighter and that he is very attractive. Something happened between the two of them while saving people from the fire. But, Brayden instantly knows that Callie is off limits. Dragon shape shifters and sorcerers are enemies. Becoming lovers would really be off limits. Callie is only aware that Brayden is not only human, but has some other quality as well. When it becomes clear that a dangerous dragon, not allowed to break though, is behind the fires and that Callie's brother is involved somehow, Brayden must protect Callie and the city. Although this is a short story I felt like it did it's job by setting up the series. We get a love story and are introduced to future protagonist. Firefighters are sexy. They just are. So, I was instantly drawn to Brayden. Not only that, he does something for Callie that only a man that is really in love would have risked. It was a major "Sigh" moment. I enjoyed this one so much I have already added the next book in the series to my TBR list: A Dragon's Heart. This book is available in the kindle store right as a single title, but is also part of the Forbidden Lovers box set. The entire box set is only 99 cents. You can check it out at <a href="http://smarturl.it/smp99c" target="_blank" rel="nofollow">http://smarturl.it/smp99c This one gets a B+