AFTER THE KISS BY LAUREN LAYNE 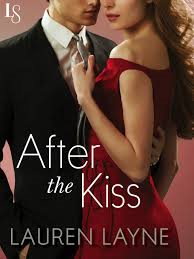 After the Kiss by Lauren Layne is a Kensington/Random House/Loveswept publication. This book was released in August 2013.
Thanks to Netgalley and the publisher for the DRC of this book.

Julie Greene works for Stiletto Magazine. The magazine features stories on dating, sex, romance, and relationships. Julie was only twenty-two when she started working for the magazine. She carved out a niche for herself writing about the first time your eyes met his across a crowded room, the first date, the first kiss- you get the idea. But, after Julie reels them in, well, she moved on before the dreaded "movie night"  and before she finds herself washing some guy's boxer shorts.

But, Julie's boss assigns her a new story where she must write about what comes after the kiss. Julie does. not. want to write this story. She tries to pass it off to other writers, but her boss is insistent.

While at a social gathering, Julie zeros in on Mitchell Forbes.  He looks like the relationship type.
However, Mitchell just broke up with his long time girlfriend. His buddy suggest Mitchell try to just have a fling. That's not something that's in Mitchell's DNA. So, the two buddies make a bet. Mitchell must now go out and have a fling. Julie Greene's reputation makes her the perfect choice.

So, Julie is looking for a relationship, while Mitchell is looking for a fling.
This hilarious set up has some really funny moments. But, all good things must come to an end. Sooner or later one of them is bound to find out about the other's motives. This naturally leads to a great deal of drama.

This short contemporary romance has elements of chick lit or romantic comedy.  This is Julie's first attempt at sticking it out with one guy. She learns that relationships have a lot of  fringe benefits and are worth the effort, even if it means movie night, which Julie learns is actually pretty fun.
Mitchell is a wonderful hero. He really comes through for Julie.
I read this book in the car on a short trip with my husband. When I finished the last page, my husband asked me what I was smiling about. Enough said.
This one gets an A.
Posted by gpangel at 6:35 AM