A DRAGON'S HEART BY TAMELIA TUMLIN 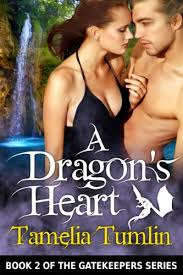 My rating: 3 of 5 stars
A Dragon's Heart by Tamelia Tumlin is a Steel Magnolia Press Publication. This book was released in 2013. This is the second book is the Gatekeepers series. This book is really a novella with about 100 pages.  Elena's sister, Isabel, has gone missing in the Rio area. Zeke, the air dragon shifter is implored to help Elena look for her sister. Against his better judgment, he agrees. Helping humans is not his job. But, while out on the Amazonia, Zeke and Elena learn that her sister has been kidnapped and taken through a portal. It is forbidden humans to pass through the portal and Zeke will not take Elena there. Desperate, and with a little help, Elena crosses anyway. Now Zeke must find her and if she is still alive he will have to see that she stands trial for entering the portal. But, Elena finds her sister and discovers was kidnapped as part of a human trafficking scheme. Zeke takes his responsibilities as an air dragon and gatekeeper seriously. He is stickler for rules. He has been engaged for most of his life and now he finds his attraction to Elena particularly bitter. He has no desire to marry the woman he is engaged to. But, he is honor bound to marry her and refuses to shame the woman or their two families.  But, there is no denying that Zeke has feelings for Elena and she for him. Zeke is willing to give up  his principles and deal with the aftermath of his decisions, if it means he can keep Elena safe. For the only way to keep her from prison and maybe even death if for him to marry her. I loved the first story in this series. This one was good, but it lacked something. I think the brevity of the book in this case was a hinderance. For all her determination to help her sister, Elena's sister uttered maybe a whole sentence in the book and the two never saw each other outside  of being kidnapped together. <br />The romance was way too rushed, sort of tacked on at the very end.  This series has potential, and I believe there is a third book out in this series. I think a few added pages would help these stories develop better.  There are lots of angles and stories that could come from this set up.  This was enjoyable enough. I took a little break and finished it pretty quick. It will certainly take you way from anything too serious or heavy. I give this one a C.
<a href="http://www.goodreads.com/review/list/5210022-julie">View all my reviews</a>