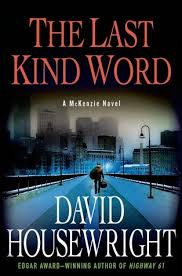 My rating: 4 of 5 stars
The Last Kind Word is a Minotaur publication with a June 2013 release date. I received a DRC of this book from Netgalley and the publisher.  Set in Minnesota, this latest chapter in the Rushmore McKenzie series, finds McKenzie working undercover for the ATF and FBI in an attempt to track down a group of gunrunners. The small towns of Minnesota are drying up due to job losses, and lack of tax revenues. This group of armed robbers that McKenzie hooks up with are really just a group of people down on their luck and desperate. Going by the name "Dyson", McKenzie keeps the group busy by planning an elaborate armored car robbery. This keeps the group from attempting anymore robberies and gives Dyson an inside track on where the illegal weapons are coming in from. However, things don't go as planned. First of all McKenzie begins to sort of like some of these people and is even finding himself attracted to one of the women, or maybe two of the women. He is also stunned to find that everyone in town is aware of him and his planned robbery. Two deputies hold it over his head, a local crime leader wants in on the heist, and before he knows it, the whole thing has gotten way out of hand. McKenzie and his 'inner voice' have long conversations as he tries to outwit the local deputies, the others wanting a piece of the pie and someone that's a rat. He also ponders his relationship with his girlfriend and their future together. When the planned knock off the armored cars gets rolling a couple of unforeseen complications arise. McKenzie has to think on his feet and think fast. The first chapter will suck you in. Lots and Lots of action. The characters were all flawed, but weren't your run of the mill crooks. Like McKenzie, you can start to sort of relate to them and you don't want them to go to jail. More than once I wondered what McKenzie was thinking. Was he really going to go through with this robbery? Was he falling for another woman? I questioned whether or not McKenzie was starting to think he really was Dyson. However, he kept reminding himself to 'stay in character'. I loved this crime novel. It was really different and original. I loved McKenzie and his wit and humanity. He was one smart cookie. A wonderful cast of characters, non stop action and suspense.  If you like heist, capers, and crime novels you will not want to miss this one. I give this on an A.
<a href="http://www.goodreads.com/review/list/5210022-julie">View all my reviews</a>