ONE STEP TOO FAR BY TINA SESKIS 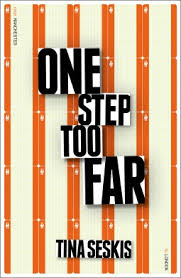 My rating: 4 of 5 stars
One Step Too Far by Tina Seskis was published by Kirk Parolles and is an April 2013 release. The book begins in 2010. Emily decides to do what many people fantasize about. She packs a bag, withdraws money from the bank and skips out her husband, Ben and  her family.  She moves into a run down  flophouse. She immediately becomes friends with Angel. The two hit off and Emily changes her name to Cat and picks up Angel's habits. She steals clothes, drinks to excess, and begins doing drugs. While at first we have no clue as to why Emily has made this decision, we get the feeling she is really proud of herself. She gets a job and starts the bottom and works her way up in record time. She becomes close with her boss, Simon. It all seems like she pulled it off. She actually left her old life behind and started an entirely new one. Of course there is a back story. First of all Emily is a twin. While Emily has always been the stable, responsible, successful sister, Caroline was always going through one crisis or another. She had eating disorders, drug and alcohol addictions, abortions, and was always in and out of rehab. Emily's parent's marriage was a sham and finally they divorce after Emily's marriage. We begin to get the idea that something happened that drove Emily and Ben apart. Something disrupted Emily's life to the point where she thought everyone was better off with her out of the picture. I also felt like Emily was in denial and had been unable to face whatever had happened. Therefore, she became a different person -from the dependable Emily, to party girl, Cat. Meanwhile, bits and pieces of Emily's life unfold. We learn how she and Ben met, fell in love, and got married. We learn about Caroline's problems and all the stunts she has pulled over the years. We learn about Emily's parents and her philandering father. Finally toward the end of the book we begin to get glimpses of what Ben has been going through after his wife walks out on him. Eventually, though things catch up to "Cat" and she is forced to face up to the events that caused her to run away. If you have read any reviews about this book, you have been told there is a major twist at the end. There is a twist, an no, I don't anyone would ever be able to see it coming. Once you digest that new view of things, the author still keeps you guessing a bit. I was rather pleased with the ending. This was an interesting novel. The themes explored are difficult and the road was hilly and curvy, very painful and sad. But, I loved how Emily still managed to land on her feet. I'm not sure what genre to place this one in. It was a mystery, but not in the traditional sense. It was I suppose more a drama about life and family and friendship and the curves life throws at us that we either are strong enough to deal with or we find some other way of coping. Some recover and get their lives back on track and others are never the same. Thankfully, we get the idea that things will work out for all the people featured in the novel. Overall I give this on an A-. Thanks to the author and Netgalley for the DRC of this book.