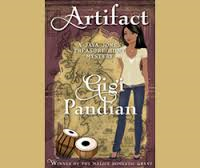 My rating: 4 of 5 stars
Artifact is a Henery Press Publication. This book is scheduled to be released in August of 2013. Jaya Jones is a historian living in San Francisco. All in one day she receives a package from her former lover, Rupert has a ruby bracelet enclosed with a note to Jaya explaining he need to keep the bracelet for him for awhile and that she would know what to do. He wanted her to call him, but that would be a little hard to do, because she also finds out the Rupert has been killed in a car accident. Seeking more information about the bracelet, she heads to the university and is referred to a graduate student named Lane. When Lane sees the bracelet he is very interested. Interested enough to seek Jaya out and go along with her to Britain to do more research- because Jaya is convinced that Rupert was on to something and was murdered. After flying to Britain, Lane and Jaya follow the clues to an archaeological dig in Scotland. Once introduce to the gang on dig, Jaya finds herself being reacquainted with Rupert's best friend Knox. When someone on the dig is murdered, Jaya is in danger and the number one suspect. Jaya's heritage and historical expertise come in handy when stories of fairies and other superstitions come out, but also the bracelet can be traced back to wars and rebellions from the 17 and 1800's that involved Britain and India. Jaya is a person that is easy to relate to. The story is told from her perspective. (First person narrative). She is smart, funny, big hearted , but tries to pass herself off as jaded and cynical. The mystery was well plotted with a few twist along the way. That could be irritating though, since it was always at the end of a chapter and I HAD to read the next one, then the next one. ( Grin) A solid whodunit, treasure hunt and light romance all in one. Yes, there are the inevitable comparisons to Elizabeth Peters. But, really ,who doesn't love Amelia Peabody? I think it's wonderful that someone has picked up where Peters left off and presented a modern day version of Amelia or Vicki Bliss. I LOVED it when Lane referred to Jaya by her last name. Cool! I'm impressed with this one. Overall a solid A.
<a href="http://www.goodreads.com/review/list/5210022-julie">View all my reviews</a>