A WONDERFUL PIECE OF DARK MAHOGANY BY JU EPHRAIME 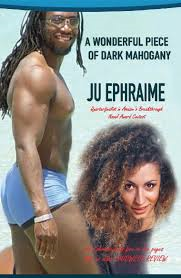 My rating: 5 of 5 stars
A Wonderful piece of Dark Mahogany by Ju Ephraime is a 2013 copyright and is an Envision publication. I received a copy of this book from the author in exchange for an honest review. On the island of St. Lucia, Mel literally runs into Craig. Instantly, something happened between the two. Craig begins a routine of walking Mel to her bus stop every day after work. The two spend their evenings thinking of each other, knowing deep down that something special is brewing between them. They never have exchanged phone numbers or anything, but they see each other everyday. Finally, after several weeks, Craig can't hold back any longer and gives Mel a good, long, luxurious kiss at the bus stop.  But, the next day, Craig is MIA. Mel is so confused and sad she literally becomes ill. Not only is Mel dealing with these intense feelings for Craig, she is also dealing with the boss from hell. The man sexually harasses her everyday. His attentions become more and more aggressive as each day passes. Craig has many responsibilities running the banana plantation his family owns. He is having problems with his brothers, one has a drinking problems and youngest, Phillip, is a later in life child and spoiled rotten. After Mel and Craig get their wires crossed for several days, they realize they need to address their feelings for each other and where the relationship is headed. There are many issues the couple must face. They will have to put past relationships to rest, deal with Mel's boss, and the expectations of their families.  There may also be a few people that aren't too happy about the relationship between Craig and Mel and use any means to see that they don't make it as a couple. Ladies, if you could create the perfect man- Craig would be the prototype. He's more than attractive, he's absolutely beautiful with a set of golden eyes that are mesmerizing. But, that's not all there is to him. He is thoughtful, protective, and attentive, a true romantic. He just sweeps Mel off her feet. He has principles and takes his responsibilities to his family and his business seriously. Mel has had a bad experience in the past with a man, and is nervous about taking the relationship to the next level. She also has a value system she sticks to. She respects her parents and the fact that she still lives in their home, she is sensitive to their rules and value system. I LOVED the slow development of the relationship. This was a true romance novel. The "get to know you" stage, the "making out" stage and the occasional misunderstandings and nervousness about the future, THEN, we have the physical consummation. Again, Craig was dreamy. OK, I admit it, I have a crush on the guy. It would be hard resist this guy. The reason I tipped this novel up to the five star rating was because I liked the respect these two people showed each other and their parents. The value system they adhered to and the way they worked through their problems without a lot of immature behavior. The romance was so real and deep. We know these two were meant for each other and will have a long and happy life together. This book would appeal to all lovers of romance, especially those that enjoy contemporary novels. A+