A BAD DAY FOR ROMANCE BY SOPHIE LITTLEFIELD 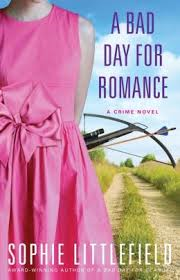 My rating: 4 of 5 stars
A Bad Day for Romance by Sophie Littlefield is the fifth installment in the award winning "Bad Day" series. This is a Pocket Books publications a division of Simon and Schuster. This book will release in September of 2013. When Dotty and Kam decide to get married, it's a rushed affair, but not because it's a shotgun wedding. They just want to get married- now! But, a big wrench gets thrown into their plans when the minister's niece, Divinity, is accused of murdering her boyfriend and promoter. In order to keep from having the wedding postponed, Stella Hardesty agrees to help clear things up so Dotty's family can attend the wedding. When Divinity, a child beauty pageant winner,( beautiful on the outside- not so much on the inside),  and aspiring singer, gets a chance to be on a reality show, it looks like she might get the exposure she badly needs to launch her career. But, when her promoter continues to give out the choice spots to other women, he winds up dead. Divinity isn't the only suspect Stella and her trusty assistant, Chrissy uncovers. The world of "Reality TV" is not what it seems. The competition is deadly. Stella doesn't ordinarily work this type of investigation. Stella has an underground enterprise that helps battered women. But, her skills as a gun toting vigilante comes in handy as she and Chrissy come across some rather shady characters. In the meantime, Stella is struggling with the lukewarm relationship she has with her sometime boyfriend BJ. To make matters even more confusing, Stella learns that super hot sheriff- Goat Jones has openly admitted he has feelings for Stella. This book was terrific. Stella is a "mature" woman in her early fifties living  in Missouri. She is a seamstress by trade, a survivor of domestic violence, and has a huge heart. She also has not one, but two men interested in her. Because of her past, sometimes Stella questions whether or not she wants to be with any man. She has a business, she helps people in need, and she has close friends and family. But, deep down Stella knows she really wants a good solid relationship with a good solid man. But, is that man BJ or is it the sheriff- Goat? A behind the scenes look at reality TV and the little bit of soul selling people will do to have a shot at fame and fortune. I have no doubt that author's take on that world was pretty accurate. This book has everything you could ask for in a novel- laugh out loud screwball comedy, mystery and suspense, sweet and sexy romance, and a little sobering reality.  Stella was great. I wish there were more characters like her out there. She is a real inspiration. Live life to the fullest , no matter what your age. It's never too late for anything. The mystery was a real mystery. You will never guess who the murderer was.  So, the ending was a little bittersweet, but for Stella the ending was just perfect. This book would appeal to lovers of mystery, chick-lit and contemporary romance. Highly recommend. A good solid A. Thanks to the publisher and Edelweiss for the DRC of this book.
<a href="http://www.goodreads.com/review/list/5210022-julie">View all my reviews</a>