WHAT DARKNESS BRINGS BY C.S. HARRIS 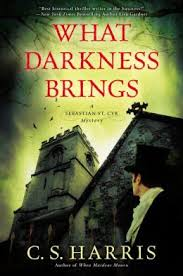 My rating: <a href="http://www.goodreads.com/review/show/561922855">4 of 5 stars
What Darkness Brings is the eighth installment in the Sebastian St. Cyr series by C.S. Harris. This is a Penguin Publication and was released in March 2013. Thanks to Netgalley and the publisher for the digital copy of this book.Set during the Regency Period in England, this historical mystery starts off with a bang. A particularly nasty, evil, diamond dealer is murdered. Russell Yates, Kat's husband is arrested for the his murder. The rumors are that the old man had the infamous "Hope Diamond" and that the diamond is now missing. Before Sebastian is informed of this situation, he is saddened to learn that his old friend Major Rhys Wilkinson has passed. The death disturbs Sebastian because it appears the man may have committed suicide. On a more personal note, Sebastian is settling into married life with Hero. She is pregnant, but this is still being kept a secret. Hero is the daughter of Jarvis, Sebastian's worst enemy. This makes for an even more uneasy situation between the newlyweds. Hero is supportive of Sebastian offering to help Russell Yates, even though it will put him in direct contact with Kat, the greatest love of his life. As Sebastian begins looking into the death of the diamond dealer, he finds that the man was pure evil and no one is sad about his death. The man was into all sorts of occult rituals, and blackmail. So, any number of people are suspect. But, the rumor that the diamond may have been a part of the crown jewels, and that Napoleon will stop at nothing to retrieve it, takes the intrigue up a few notches. This series is so multi layered. All the old familiar characters are back. Jarvis, "Prinny", Kat, Tom, Hendon, and Hero. Also, Knox, the man that bears a striking resemblance to Sebastian. Sebastian's parentage is still unknown, the real relationship he has with Kat still feels unresolved. The new marriage  to Hero and the many secrets that each still carries threatens the fragile relationship. However, Hero doesn't allow her insecurities to show and actually jumps into the investigation and helps Sebastian with some research, among other things. These are darker toned British mysteries. Very atmospheric and utterly absorbing. If you have not read any of the previous books in this series, it would be beneficial to go back do a little catching up. The backstory of Kat and Sebastian is explained in this book to some extent, but to get the whole story  and a better understanding of all Sebastian's relationships, it would be a good idea to get a little more background information. This book can be read as a stand alone, but I think it would make a lot more sense if you had some previous knowledge about some of the characters . This is an outstanding series and I would recommend it to anyone that loves mysteries. This series would especially appeal to those that enjoy British mysteries and historical mysteries. This one gets an A.