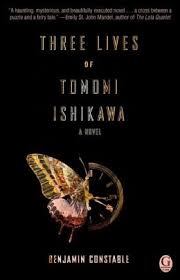 My rating: 4 of 5 stars
The Three Lives of Tomomi Ishikawa by Ben Constable is a Simon and Schuster publication. This book was released in June 2013. Ben receives a rambling note from his friend he usually refers to as butterfly. She informs him she intends to commit suicide and by the time he gets the note she would be dead. She bequeaths him her laptop computer, which leads him to discover a letter and sets him on a massive "treasure" hunt. He starts off in Paris and winds up in New York where he meets Beatrice. The two of them continue following the clues Butterfly left Ben, revealing what appears to be the confession of several murders committed by Butterfly. But, are these stories real? Is butterfly really murderer. What is Beatrice's connection to Butterfly? Why is his friend revealing all to him? Is it so he can write a book about her or does she have something more sinister in mind for Ben? What was the nature of the relationship between Ben and Butterfly? Why all these questions?Well, these are the questions I was asking as I read the novel. These questions and a lot more. The first thing you may notice is that the author named the protagonist after himself. How interesting. The next thing that I found curious was his cat- named Cat. Not your normal domesticated pet. Then we have Ben's response to his friend's suicide. He doesn't ask if this was in character with his friend's personality or anything. He just presumes it's true despite the fact there is no body and nobody even reports her missing. Instead Ben plays the came his friend went to great lengths to plan out for him. Ben doesn't have any trouble at all finding  the clues left for him, and at times is able to think ahead of Butterfly. However, that might not be such a good idea for Ben. The author lets us get us draw our own conclusions about what ending we want to apply to the book and what was and wasn't real. As others have stated, this book doesn't really fit into a specific genre. It's a mystery, a psychological thriller, with a well paced build up of suspense. It is hard to review the book as I normally would because I don't want to give too much away. I thing it's one of the most unique and imaginative novels I've read in awhile. I was completely absorbed in it from the very first chapter and read through it in record time. This is a novel you will think about for awhile after you finish it. I think that you could read it a second and a third time and come way with a different perspective each time. A highly recommended puzzle. Overall this one gets an A.