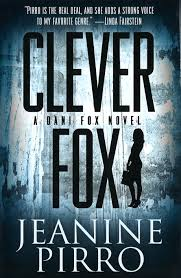 My rating: 5 of 5 stars
Clever Fox: A Dani Fox Novel by Jeanine Pirro is a Hyperion publication. This book was released in July 2013. I would like to thank the publisher and Netgalley for the digital copy of this book. It is New Years Eve 1979. Dani and her reporter boyfriend, Will, are celebrating in Times Square when they both paged. A woman was brutally murdered and mutilated. Dani , one the first women to become an ADA, is assigned the case along with an Irish cop named O'Brien. When the victim is identified as the daughter of a mob boss, the FBI tries to stick their noses into the investigation. They are all convinced that a rival mob boss killed the girl, but Dani is having doubts despite the mounting evidence. As the probe deepens, Dani and Will begin to have problems in their personal relationship. Their jobs are a major conflict between them. To make matters worse, a very charismatic FBI agent has started to horn in not only with the investigation, but with Dani. Politics also rears it's ugly head because Dani's boss likes to yuck it up in front of the TV cameras. As two rival mob families dance around a mob war, Dani finds that she only has one other person she can trust besides herself. She is pressured to file charges against a man she is not convinced is guilty, she gets caught in the cross fire of the mob, and deals with her crumbling personal life and the very persistent FBI. A very smart plot. The mob, the attitudes toward women in the work place, the politics in the DA's office, the courtroom drama, Dani's personal life, and police work all melded together to take us on a rip roaring ride through the dark murky waters of the justice system, the unapologetic journalist attitude, the mob, gross abuse of power, and the courage and bravery of one person that brought it all to an end. <br />I read several books at a time, but when I got started on this one, I just kept right on reading it until I finished it. I couldn't put it down. The author knows just how to bait you at the end of each chapter. I read a lot and I can be a little jaded, so if you can sucker me into staying up way past my bedtime, then you deserve a five star rating. Part crime drama, part legal thriller, part mystery and all the way authentic. I never questioned the likelihood of the plot. It was like I was reading about an actual case. I loved it. I recommend this to all lovers of mystery/thrillers.  A+
<a href="http://www.goodreads.com/review/list/5210022-julie">View all my reviews</a>