SOMEBODY TO LOVE BY KRISTAN HIGGINS 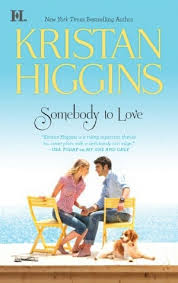 My rating: 4 of 5 stars
Somebody to Love by Kristan Higgins is a HQN publication. This book was released in 2012. I received a copy of this book from the publisher and Edelweiss for an honest review. This is a follow up the novel "The Next Best Thing". This book can be read as a stand alone, however. Parker is a single mom to five year old Nicky. She writes children's books for charity. She's a little burned out on the series and is ready to try something else. She has never had to worry about money. But, when her father, Harry, is turned in for insider trading, she finds out she is broke. No trust fund for her or Nicky, no home, no job. The only thing she has is a cottage on the Maine coast. So, with Nicky's father, Ethan, taking him on a vacation for a few weeks, Parker heads off to Maine hoping to 'flip' the cottage and make enough money for her and Nicky to have a fresh start. When Parker finds the cottage, it's a shock. The house is about to fall down and is pretty much just a shack. Parker doesn't know if she has the money to fix it up. Then her father's attorney, James, arrives offering her help getting the house in shape. Her best friend's advice about having a summer fling keeps coming to mind more and more and James appears to be game. James has been Harry's attorney and friend for good while. He and Parker have had a few moments between them, but Parker made it clear that there wouldn't be more. James really wants to have a relationship with Parker, but he is holding on to an explosive secret. If Parker were to find out about it, it would ruin his chances with her. Not only that, James has a very difficult family life. Another thing he is very secretive about. Parker also has a lot on her plate. Her mother is oft married and lives off her many marriages to wealthy men. Parker and her father do not like each other very much. James has often wondered what came between them. As work on the house gets started, James and Parker grow closer. But, Parker is worried about her son and all the sudden changes in his life. Would her having a relationship be too much for Nicky? Not only that James and Nicky seem to clash. Parker handles the turn her life has taken with courage and strength. Her thoughts are often hilarious. She is a good mom and puts Nicky's well being first. But, doesn't Parker deserve some happiness too? Both Parker and James will have to learn to come to terms with their family issues and the differences and misunderstandings between them before they can hope to have a future. The road is a little rocky, but this was one of the sweetest HEA endings I've ever read. A Solid A.
<a href="http://www.goodreads.com/review/list/5210022-julie">View all my reviews</a>