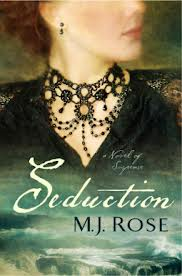 My rating: 4 of 5 stars
Seduction by M.J. Rose is an Atria publication. I received this DRC from the publisher and Edelweiss in exchange for an honest review. Mythologist, Jac L'Etoile, has had her fair share of grief. She is under the care of her mentor and counselor, Malachi Samuels. When she is contacted by her old friend, Theo about studying some Celtic ruins, Jac is very excited to go. But, Malachi warns her to be very careful. Theo had just lost his wife and he had never been really stable. But, Jac made up her mind to travel to the Isle of Jersey to meet with Theo. When Jac arrives she discovers that Theo did actually have an ulterior motive. He had discovered his grandfather had some letters or a journal of the famed novelist Victor Hugo. He wants Jac to use her special abilities to help him discover the communications between Hugo and a spirit called the Shadow of the Sepulcher. The relationship between Jac and Theo began back in their teens when they were both in an institution. The two formed a bond, but then Theo was sent home under a cloud of suspicion. Now, Jac finds Theo grieving for his wife, but at odds with his brother, Ash. The story starts out with the journals of Victor Hugo. The death of his beloved daughter has lead him into spiritualism in hopes of communicating with her again. But, what he encounters are various other spirits, and one very evil one. We alternate between the past and Victor's journals to the present with Jac and Theo hunting for more of Victor's journals and Jac having more frequent hallucinations. We finally begin to see an ironic connection between the past and the present that involves old Druid rituals, mythology, and reincarnation. It took me a little while to get into this one. I couldn't figure out how any of the various threads were ever going to come together and make any sense. The atmosphere is heavy, dark and there are few real spine tingling moments. In the end, Jac is able to understand her role and gift, but also gets to find a little of her own history, which gives her a new direction to go in. The pace is slow, but this adds to the suspense. I just think that maybe there was just a little too much going on sometimes and it was easy to get lost. The history was based in fact, and was very interesting. I don't know what I was expecting with this novel. I haven't read a lot of this author's work. It was a little off the beaten path for me and sort of defies a specific genre. I think it might really belong more in the horror genre than in mystery or paranormal romance. But, it was a certainly imaginative. Overall I give this one a B.
<a href="http://www.goodreads.com/review/list/5210022-julie">View all my reviews</a>