THE MYSTERY OF MERCY CLOSE 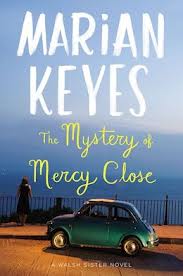 My rating: 4 of 5 stars
The Mystery of Mercy Close by Marian Keyes is an Adult Viking publication. The is the fifth Walsh Family novel.This book centers on Helen Walsh. Helen is going through a really hard time. The economy is forcing folks to cut back and people are not calling of private detectives much these days. Her once thriving detective business has come to a halt. She loses her apartment and must move back home with her elderly parents. Helen has a nice boyfriend, but their relationship is complicated by an ex-wife that still comes and goes like she still lives with him and his three children. When Jay, Helen's ex-boyfriend, shows up wanting to hire her to find a missing person, Helen can not refuse that kind of money. So, she starts work on locating Wayne- "The Wacky One", a former member of a wildly popular boy band called Laddz. It seems the group is reforming for a one time reunion show, but Wayne is AWOL. The other members of the band are all desperate to find Wayne because if the show doesn't happen they will all lose a lot of money. Helen hits one brick wall after another searching for Wayne. But, it's particularly hard on Helen because she is suffering from a recurrence of clinical depression. She fights hard to overcome her urges of suicide and seeks help, but the illness is nearly debilitating at times.The backstory of Helen and Jay's relationship keeps us wondering what went wrong between them and if Helen still has feelings for him. Helen also begins spending a great deal of time at Wayne's house, feeling some sort of a connection with him.I loved the setting- Ireland. The humor mixed in with the dark depths of an uncomfortable topic was pulled off with aplomb. There were some laugh out loud moments, and some poignant moments as well as a compelling mystery. This a unique novel. I have not read any of the other Walsh Family novels, but I would like to some time in the future. Thanks to the publisher and Netgalley for the ARC of this book. Overall an A-