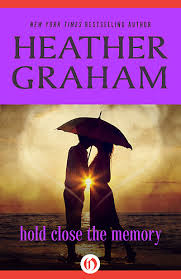 My rating: "http://www.goodreads.com/review/show/623369791">3 of 5 stars
Hold Close the Memory was originally published in the mid eighties. Open Road Media has released the book in digital format with a new nice new  updated cover. I would like to thank the publisher and Netgalley for the opportunity to read this book and review it. Kim married at eighteen. Brian was the absolute love of her life. She got pregnant accidently soon after the marriage and had twin boys. But, Brian was drafted and went to Vietnam. Before she knew it Kim was a told her husband was dead. A body was brought back and a buried. Kim got a job as a commercial photographer and raised her two boys single handedly. Then she met Keith. After three years of dating, Keith has finally convinced Kim to at least move in with him even though he really wants to them to marry. But, the day before she is set to make the big move, her husband shows up at her house alive and well. The body that had been buried was his army friend. After long months of red tape he was finally declared alive again. Now he wants to meet his boys and resume his marriage to Kim. This theme has been explored countless times. It is always thought provoking. I have to imagine myself in that position. For Kim it was just a shock and frankly Brian didn't really give her a chance to absorb the situation fully before he just barged in and demanded she make a choice between him and Keith. One thing to remember though is that this book was written in the eighties and so some of the male characters in romance novels published in that time would be considered jerks today. So, for me Brian came on way too strong and he was a big fat hypocrite as well. He does soften up a little when Kim confronts him about his actions during the time he was a prisoner in Vietnam and with some of the things he had done when he had returned home as well. To me Brian was wrong in so many ways that I just never warmed up to him. I did try to see things from his perspective and could understand some things, but he had a double standard. Kim never betrayed him because the whole time he was gone she thought he was dead. That should have counted for something in Brian's eyes. But, he never really apologized for the things he did and never even seemed remorseful about it. Kim's situation was much easier to understand and I felt empathy for her. I understood her choice in the end and was hopeful that there was be a HEA for everyone. This was not my favorite Heather Graham novel. It was emotional and made you think about things. I just didn't like the way some things were handled which put a damper on the end result for me. The story is compelling and I do urge you to try out these older titles that are being released in e book form.  Just keep in mind the time period the book was written in and don't let the male attitudes taint the story for you. Overall I would give this one a B-/C+