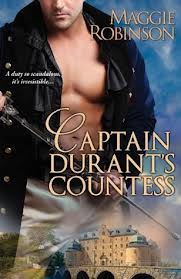 3 of 5 stars
Captain Durant's Countess is the second in the "The London List" series. This is a regency period historical romance, published  by Kensington and released in February of 2013. Maris married Henry, an Earl, many years older than herself. Although they attempted a "normal" marriage, the Earl was impotent. Now Henry is in his eighties and his health is very poor. The only male heir is a nephew that Henry holds responsible for his daughter's death. To keep him from inheriting, Henry devises a plan. Maris feels she owes Henry everything and she is completely devoted to him. She is also suffering from guilt and sadness because of the situation with David, the Earl's nephew. So, even though she detest Henry's idea of preventing David from becoming the heir, she goes along with it. Captain Durant, Reyn, was commissioned by Henry to impregnate Maris. He is paid a handsome sum of money, which is needed terribly because his dear sister is quite ill. But, then he has second thoughts. I have read other romance novels that employed a variation of this theme. So, the storyline isn't completely original, but it is at least different from the usual regency period historical romances that focus on society rules, balls, gowns and so on. For me this one was a little bland and predictable. Things just work out too easily. The villainous David came up with the most surprising twist in the book toward the end and I really liked the way all of it turned out. The story ends up being a sweet romance. Captain Durant finally gets a real job and grows up emotionally. Maris gets her happily ever after as do all the other secondary characters. There were some rather modern thoughts and phrases again, which has become my big pet peeve in current historical romances, but for the most part this one stuck to the script in that regard. The story is enjoyable enough, but it didn't have anything that made it really standout especially. I'm giving this one a C+.