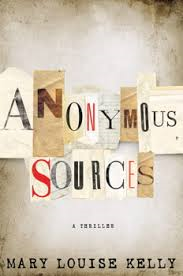 My rating: 4 of 5 stars
I was a little confused when I tried to add this book to my Goodreads list. My book is a digital ARC entitled Anonymous Sources that I received through Edelweiss and Gallery publications. The name of the book must have been changed because it is listed as Unnamed Sources on Goodreads and a few other book club sites. So, if you go looking for this one be aware of the name change. Alex is a reporter. Her usual beat is Education. But, when Thom Carlyle flies out of a fifth story window on the famed Harvard campus, Alex discovers that Thom's father is the lawyer to the President of the United States. This makes the death high profile. It could have been suicide, an accident or murder. Alex makes it her mission to find out what really happened to Thom. Never in her wildest imagination would she have guessed where that investigation would lead. Alex talks her boss into allowing her to travel to England where Thom had spent some time at Cambridge. There she finds out that Thom had indeed had some heavy personal issues. She meets Thom's ex-girlfriend and her new lover and few other of Thom's friends. Then a weird incident sets Alex of on an entirely different course. She finds herself a target and on the run from terrorist. From British Intelligence to the CIA to the white house, Alex is in the fight of a lifetime as she tries to convince everyone that the US is in danger of another major terrorist plot. Alex is a troubled woman with a tragic past. She deals with it by keeping herself busy with her career. After having suffered such a terrible blow, Alex has no fear of anything. She's suffered the worst thing she can imagine, so she feels nothing could ever top that pain. So, she is very brave, and takes risk others might think twice about. But, despite all that, Alex is in way over her head and is running out of time. I noticed that there were no other books listed by this author, so I am going to assume this is the first novel written by Mary Louise Kelly. If indeed this is the author's first effort as a novelist, then hats off to her. The thriller and spy genre needs to be given a great deal of latitude when it comes to plausibility. There were some parts where one had to play along even though the events were not all that likely to actually work that way. But, the author did a good job of building suspense. There was even a lot of food for thought about how clever criminals and terrorist can be.  This was a fast paced novel, which kept me engaged all the way through. There is also a bit of romance to round out the novel. Looks like a nice start for a series. I think the author is off to a good start here and I hope there will be more adventures for Alex. Overall a B.
Posted by gpangel at 10:09 AM