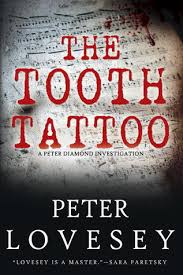 The Tooth Tattoo is the 13th Peter Diamond novel. This book is scheduled for release in April 2013. This is a Soho Crime publication. The author is Peter Lovesey. While taking a brief and rare weekend off together, Peter and Paloma tour Vienna. While there, they come across a shrine of flowers remembering a Japanese girl who had died. The death of the girl and the tribute to her deeply effected Paloma, while Peter remains detached, a occupational hazard. As a result, when they return home, a rift develops between them when Peter has the death looked into. In the meanwhile, the team is worried about cut backs so when a similar murder occurs closer to home, Peter launches an all out investigation. Were the deaths of two Japanese girls found in the water four years apart somehow related? What on earth did a classical music quartet have to do with it? The quirky group of classical musicians all seem to have a secret or issues of some kind. Their intense focus on the music makes them seem uninterested in the death of two girls that were big fans of their music. To add to the mystery, one the group's members disappeared right around the time of the first girl's death. As Peter tries to determine what each girl had in common and their connection to the quartet, he struggles with the issues that have developed between him and Paloma.This is a good British detective novel. The tooth tattoo is an actual adornment that is very popular in Japan. I had no idea. The musical references were also interesting. You do not have to be a fan of classical music or be knowledgeable about it to enjoy the novel. Most of the detectives openly admitted a limited about of knowledge about Beethoven and so you won't feel left out if you've never heard of some of the pieces that were mentioned. The three original members of the quartet are odd ducks to be sure. Each one has a unique personality that you either love or don't. But, they all seem to be uneasy and you have to wonder why. The newest member, Mel, is a viola player. Another thing I learned about while reading this book. This instrument is obviously related to the violin, but has a few differences. Mel is at the center of the story since he is the newest member of the quartet. Mel is a bit of a womanizer, but mostly likeable. But, is he a possible victim or could he be involved in the murders? An inventive whodunit, with some humor and wit to off set the prevailing sad tone the book initially started out with. Peter is a little down in this one, but he isn't out. Overall a satisfying mystery. I give this one a B+. Thanks to Soho publishing and Edelweiss for the ARC .