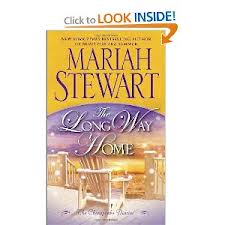 The Long Way Home: The Chesapeake Diaries is the 6th in the Chesapeake Diaries series. This book was released in Janurary 2013. This a women's fiction/contemporary romance novel and can be read as a stand alone. Ellie's father and former fiance have been imprisoned for defrauding countless people out of their life savings and retirements. Now Ellie is forced to deal with the fall out. She lived in the lap of luxury all her life, but now the SEC has taken everything she ever owned and all her friends turned their backs on her except for Carly. So, now Ellie has come to claim an old house in St. Dennis that belonged to her great aunt Lilly and Ellie has inherited from her mother. The will states Ellie must live in the house for six months before she can sell the house and it's contents. So, Ellie moves in and starts to work fixing up the house so she can sell it as soon as the six months is up. Cameron has lived in St. Dennis all his life. He had a special bond with Lilly and always planned on owning her house one day. So, for the last twelve years he has taken care of the property. Now he finds out the house had been purchased and he's furious. But, when he learns of the circumstances he visits Ellie and works out a deal that when she gets ready to sell, it will be to him. In the meantime, Cameron has agreed to help Ellie fix the place up. Ellie keeps her identity secret from the people in St. Dennis for fear of being judged for her father's crimes. But, Cameron knows that something isn't right about Ellie. The facts just don't add up. So, he sets out to discover what secrets she keeps. As Cameron and Ellie work on the house, Ellie begins to feel a bond with her great aunt and her mother that she had never had the chance to feel before. She also starts to feel a bond with Cameron. This is a story about fresh starts, growing up emotionally , healing and forgiveness. Cameron has had a very hard time himself and understands that Ellie needs time to deal with her pain. The kind folks in St. Dennis embrace Ellie despite her father's sins and her lack of faith in humanity. There is a slight paranormal story going on in the background. The story  is slow moving and and it drags in some places. There just wasn't all that much happening. There was a big plot twist that took place toward the last part of the book, but that still didn't get the story rolling along any faster. The romance was about a 2.5 on the steam level and pretty slow moving. I did like the ultimate conclusion. Family, love, healing, and the peace the characters finally get leaves us with a postive feeling. I would recommend this book for those that like women's fiction with a mature romance and a fair amount of drama. Overall I would grade this one with a C. Thanks Netgalley for the ARC