TRUE CRIME THURSDAY- The Case of the Murderous Dr. Cream: The Hunt for a Victorian Era Serial Killer by Dean Jobb 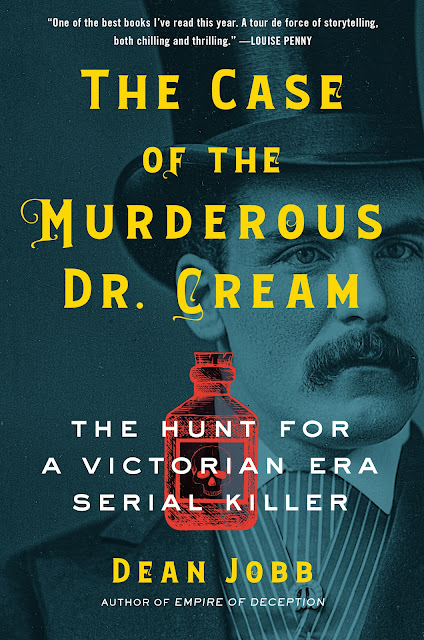 ABOUT THE BOOK:
a“When a doctor does go wrong he is the first of criminals,” Sherlock Holmes observed during one of his most baffling investigations. “He has nerve and he has knowledge.”
In the span of fifteen years, Dr. Thomas Neill Cream poisoned at least ten people in the United States, Britain, and Canada, a death toll with almost no precedents. Structured around Cream’s London murder trial in 1892, when he was finally brought to justice, The Case of the Murderous Dr. Cream exposes the blind trust given to medical practitioners, as well as the flawed detection methods, bungled investigations, corrupt officials, and stifling morality of Victorian society that allowed Cream to prey on vulnerable and desperate women, many of whom had turned to him for medical help.Dean Jobb vividly re-creates this largely forgotten historical account against the backdrop of the birth of modern policing and newly adopted forensic methods, though most police departments still scoffed at using science to solve crimes. But then most police departments could hardly imagine that serial killers existed—the term was unknown at the time. As the Chicago Tribune wrote then, Cream’s crimes marked the emergence of a new breed of killer, one who operated without motive or remorse, who “murdered simply for the sake of murder.”
READ AN EXCERPT:
MY REVIEW:

The Case of the Murderous Dr. Cream: The Hunt for a Victorian Era Serial Killer by Dean Jobb
My rating: 4 of 5 stars

The Case of the Murderous Dr. Cream: The Hunt for a Victorian Era Serial Killer by Dean Jobb is a 2021 Algonquin Books publication.

Dr. Thomas Neill Cream- cold- bloodedly poisoned at least ten people and attempted to kill several more- that we know about, in three different countries, during the Victorian era.

This case, as the blurb states, was mostly forgotten about, so I was completely unaware of it before reading this book.

Dubbed the “Lambeth poisoner", Cream preyed on prostitutes, giving them capsules which contained poison. Naturally, their deaths were hideously agonizing.

Cream held a medical license which gave him ready access to certain drugs and chemicals- a fact he did little to hide.

He also attempted to extort money from wealthy men by accusing them of committing his crimes- this didn’t work- but the attempt was incredibly bold- and just plain nuts!

Ironically, his blackmail schemes were what got him in trouble, initially, along with his reputation as an abortionist.

While he was continuously under suspicion, he managed to skirt the law for a long time- but eventually, his luck did run out.

Once he was finally brought to trial, the failures and prejudices of Scotland Yard were exposed for all to see. The class and sex of the victims played no small role this, obviously.

“The real mystery is why it took Scotland Yard so long to realize the Lambeth Poisoner was hiding in plain sight- a drug-addicted doctor who consorted with prostitutes, had access to strychnine, and knew far too much about the gruesome deaths of four women.”

Overall, this is an incredible true crime case. The author did a good job with organizing the material, and provides photographs, letters, documents and illustrations throughout, as well.

Dr. Cream is a chilling figure, and an enigma in some ways.The author doesn’t attempt to explore the psychology behind the crimes, or his choice in victims, in depth, sticking instead to more of a journalistic approach, allowing the reader to come to those obvious conclusions organically.

This book sheds light on the doctor's crimes, his methods, his boldness, and the investigations that allowed him to continue his murderous career far longer than he should have- 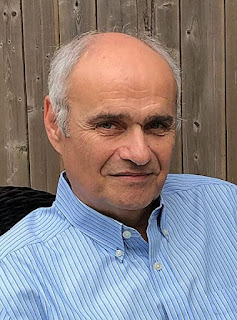 I specialize in true crime and I'm drawn to stories that have been overlooked or forgotten – hidden gems tucked away in the attics of history. My latest book, The Case of the Murderous Dr. Cream, recreates Scotland Yard's hunt for a Victorian Era serial killer who murdered as many as 10 people in Britain, the U.S. and Canada. I discovered the subject of my previous book, Empire of Deception – Leo Koretz and his amazing oil swindle in 1920s Chicago – by chance, while doing other research. I spotted a reference to his arrest in Nova Scotia and I knew instantly it was a great story.

Empire of Deception won the Crime Writers of Canada award for best true crime book of 2015, was a finalist for the Hilary Weston Writers’ Trust Prize for Nonfiction, and was named the Chicago Writers Association’s Book of the Year. I'm also the author of two collections of Nova Scotia true crime stories – Daring, Devious & Deadly (2020) and Madness, Mayhem & Murder (2021).

I write a monthly true crime column for Ellery Queen’s Mystery Magazine and my features and book reviews appear in CrimeReads, The Irish Times, the Washington Independent Review of Books, Canada’s History magazine and other major publications. I teach in the Master of Fine Arts in Creative Nonfiction program at the University of King’s College in Halifax.