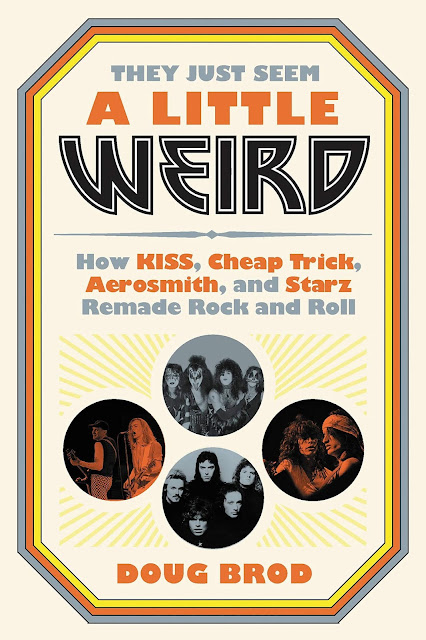 ABOUT THE BOOK:
A veteran music journalist explores how four legendary rock bands-KISS, Cheap Trick, Aerosmith, and Starz-laid the foundation for two diametrically opposed subgenres: hair metal in the '80s and grunge in the '90s.THEY JUST SEEM A LITTLE WEIRD offers an original, eye- and ear-opening look at a crucial moment in hard-rock history, when the music became fun again and a concert became a show. It's the story of four bands that started in the '70s and drew from the same seminal sources but devised vastly different sounds. It's the story of friends and frenemies who rose, fell, and soared again, often sharing stages, producers, engineers, managers, and fans-and who are still collaborating more than 40 years later.In the tradition of books like David Browne's bestselling Fire and Rain, They Just Seem a Little Weird seamlessly weaves the narratives of the mega-selling KISS, Cheap Trick, Aerosmith with . . . Starz, a criminally neglected band whose fate may have been sealed by a shocking act of violence. It's the story of how the four groups-three of them now enshrined in the Rock and Roll Hall Fame-went on to influence multiple generations of musicians, laying the foundation for two diametrically opposed rock subgenres: the hair metal of Bon Jovi, Poison, Skid Row, and Mötley Crüe in the '80s, and the grunge of Nirvana, Pearl Jam, Alice in Chains, and Melvins in the '90s.
MY REVIEW:

They Just Seem a Little Weird: How KISS, Cheap Trick, Aerosmith, and Starz Remade Rock and Roll by Doug Brod
My rating: 4 of 5 stars

They Just Seem a Little Weird by Doug Brod is a 2020 Hachette Books publication.


Mommy's alright, daddy's alright, they just seem a little weird.
Surrender, surrender, but don't give yourself away, ay, ay, ay.

The title of this book caught my eye and made me give it a closer look. At first, it confused me- Starz? What does a cable movie channel have to do with seventies arena rock? 😕😕

As familiar as I thought I was with the music of this era, I honestly have no memory of a rock group named Starz- which is partially the point of this book, as is the way these groups are connected- maybe not through six degrees, but they often rubbed elbows with one another all through the various stages of their careers.

The author alternates chapters between the four featured groups, giving the reader a brief history, and then taking us through their careers as they became successful enough to fill arenas. In the meantime, the author also shows how members of the four groups kept crossing paths in one way or another, even winding up on tour together.

Along the way Aerosmith and KISS had a complicated love/hate relationship, while both groups loved Cheap Trick. Starz on the other hand, who had a similar look to KISS, but had a different, more diverse, sound, had trouble making it off the launching pad. It could easily have gone another way- and the author examines the various elements at play that kept them from enjoying the same success as the other three bands featured in this book.

The author also examines the climate of the seventies that was ripe for the sort of raunchy, choppy, edgy sounds of Aerosmith and the comic book theatrics of KISS. The magazines – like Creem, and Circus, the famous groupies, the behind- the -scenes dramas within the bands, the songs, their inspiration- lots of cool trivia.

But, of course, the popularity of this brand of rock music reached a peak and the public turned their attention to MTV and the eventual surge of over produced music and hair metal- which certainly owed a debt of gratitude to the bands featured here. But then came grunge…

KISS conventions, and a mega-tour with KISS and Aerosmith kept them in the public eye well into the 2000s, and now Cheap Trick, KISS, and Aerosmith have all been inducted into the Rock Hall of Fame.

After giving us a little background on each band, we move through their highs and lows, breakups and reunions, and where they all eventually ended up. Sometimes it was the luck of the draw that propelled one group to mega stardom, while others are now currently residing in the ‘where are they now files’- but too often it was politics and power plays that promoted one band, while obliterating another’s chance for fame and fortune.

The book is very well- researched. In fact, it took me a while to read it, because I spent a healthy amount of time Googling some of names mentioned in the book or reminiscing about some forgotten song or band… like ‘Angel’ for example. I hadn’t thought of that group in decades. I also never heard of Enuff Z'Nuff or Piper - though I do remember Billy Squire- as a solo act. 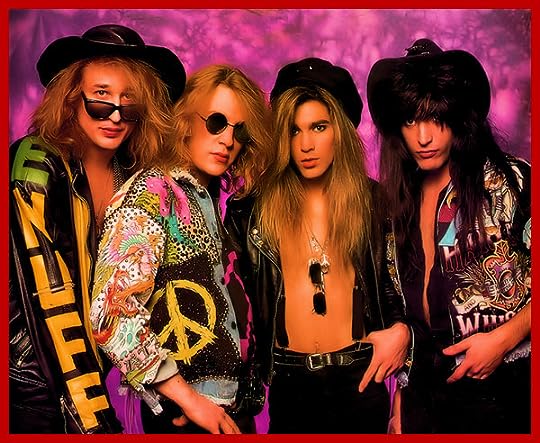 I have my own opinions about these groups and of course, my opinion is always different from everyone else. I thought KISS remained one-dimensional- not much growth musically, but they did a remarkable job marketing the group as a brand. Rock n Roll All Nite is a quintessential rock anthem- but I have a soft spot for Hard Luck Woman from the early days. I always thought it was ironic that KISS removed their makeup in the hair metal craze, while all the other MTV glitz and glam rock stars were piling it on. Poor KISS – they struggled in those days.

Aerosmith- always seemed to be compared to other groups- “the poor man’s Rolling Stones”, for example- were also stuck in a rut for a long time- but managed to pull themselves together for another resurgence. I confess- I’ve always been a fan, and have seen the group live- in various stages of their career.

Cheap Trick- probably the most original of the three- a unique look- no scarves, makeup or costumes- I loved them in my late teens, and I appreciate their contributions and talent- I still turn up ‘Dream Police’ if I hear it and have really fond memories of ‘Surrender’- the song that provided the title for this book. 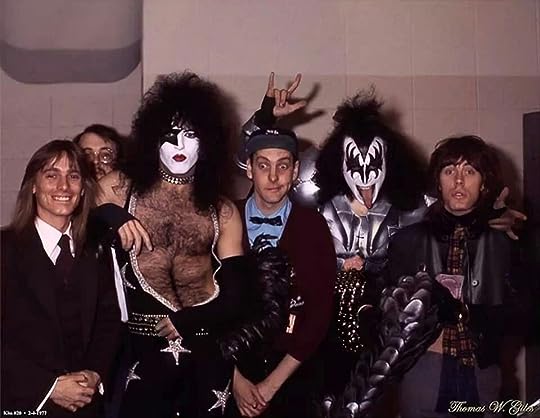 While I admit I added this book, thinking it would be a nostalgic trip down memory lane, the book turned out be a comprehensive look at select portion of hard rock music, compartmentalized in a moment of time, but one that inspired a myriad of other bands and trends in music and pop culture.

It’s also examined the way the music transitioned- branching away from mammoth rock pioneers like the Stones and the Who. It takes a deep dive into management, promotion, the competition between bands, and the underbelly of the business. 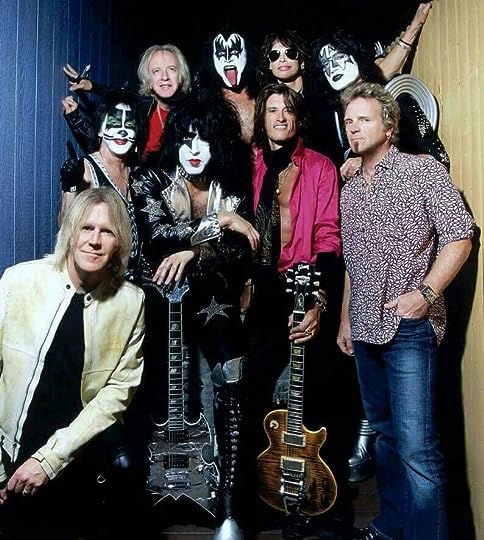 It occurs to me know now, looking back on the seventies rock era, that there were other rock ‘cliques’, like Styx, Journey and Foreigner, for example. I’m sure there were other similar groups who ended up as ‘also rans’, like Starz.

The talent, the look, the music was all there, right on target- just like the bands filling stadiums, but they were extinguished by the powers that be, or didn’t offer kick backs to the radio stations, or caught on just as the fire started to lose its flame.

Whatever happened to all this season's losers of the year?
Every time I got to thinking, where'd they disappear?
When I woke up, mom and dad are rolling on the couch.
Rolling numbers, rock and rolling, got my kiss records out. 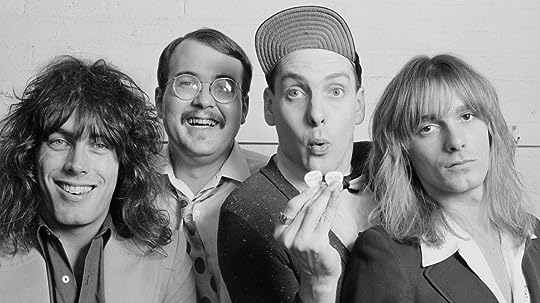 As for Starz- they got a raw deal in many ways. I'm glad this book called attention to them and I honestly found their story to one of the more interesting aspects of this book. 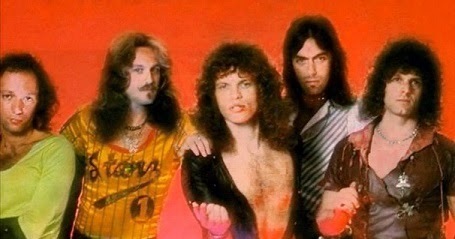 This is an absorbing book- it’s one- part musical history and criticism and one part pop culture. The tone is not really one of warm nostalgia, though- as I had originally thought. It’s more of a serious study, almost like a history class on a concentrated segment of seventies rock music.

Maybe the author will do another book like this one- over another group of rock cliques- maybe one like Deep Purple, Bad Company and Foghat or maybe one with a southern theme- like The Allman Brothers, Molly Hatchett, and Lynyrd Skynyrd – or like Bob Segar, The Eagles, and Fleetwood Mac- I could probably do this all day- so I’ll stop there- but if Doug writes another book like this one- I’ll be the first in line to read it. 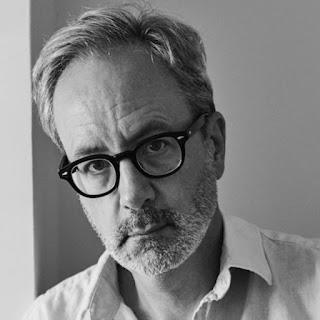 Doug Brod is the former editor in chief of SPIN magazine and was a long-time editor at Entertainment Weekly. He has worked for Atlantic Records, taught at New York University, and was a segment producer of the comedy/music television series Oddville, MTV.