When Harry Met Minnie: A True Story of Love and Friendship by Martha Teichner- Feature and Review 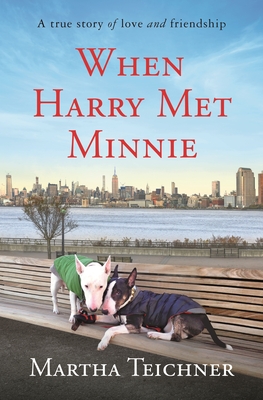 ABOUT THE BOOK:
A memoir of love and loss, of being in the right place at the right time, and of the mysterious ways a beloved pet can bring people together, from CBS Sunday Morning News correspondent and multi-Emmy-Award-winning Martha Teichner.There are true fairy tales. Stories that exist because impossible-to-explain coincidences change everything. Except in real life, not all of them have conventional, happily-ever-after endings. When Harry Met Minnie is that kind of fairy tale, with the vibrant, romantic New York City backdrop of its namesake, the movie When Harry Met Sally, and the bittersweet wisdom of Tuesdays with Morrie.There’s a special camaraderie among early-morning dog walkers. Gathering at dog runs in the park, or strolling through the farmer's market at Union Square before the bustling crowd appears, fellow pet owners become familiar–as do the personalities of their beloved animals. In this special space and time, a chance encounter with an old acquaintance changed Martha Teichner’s world. As fate would have it, her friend knew someone who was dying of cancer, from exposure to toxins after 9/11, and desperate to find a home for her dog, Harry. He was a Bull Terrier—the same breed as Martha’s dear Minnie. Would Martha consider giving Harry a safe, loving new home?In short order, boy dog meets girl dog, the fairy tale part of this story. But there is so much more to this book. After Martha agrees to meet Harry and his owner Carol, what begins as a transaction involving a dog becomes a deep and meaningful friendship between two women with complicated lives and a love of Bull Terriers in common. Through the heartbreak and grief of Carol’s illness, the bond that develops changed Martha’s life, Carol’s life, Minnie’s life, Harry’s life. As it changed Carol’s death as well.In this rich and touching narrative, Martha considers the ways our stories are shaped by the people we meet, and the profound love we can find by opening our hearts to unexpected encounters.
MY REVIEW:

When Harry Met Minnie: A True Story of Love and Friendship by Martha Teichner
My rating: 4 of 5 stars

When Harry met Minnie: A True Story of Love and Friendship by Martha Teichner is a 2020 Celadon Books publication.

A melancholy, but touchingly poignant memoir about the love of dogs and a very special unexpected friendship.

When I received a copy of this book in the mail I was super excited because it came with a cute cover and title. Looked like my kind of book!!

Then I read the synopsis, which explains the book dealt with some very heavy and sad topics. Still, I had high hopes that this book would be a special one.

Many of you hear me speak often about my cats- but I also have two Cocker Spaniels. Trust me, I love dogs just as much as I do cats! While I am not all that familiar with bull terriers, I have seen them on television, in dog shows, and think they are absolutely adorable… and no, I never thought they resembled an anteater. 😁😁

So- from one dog lover to another- I was sure this book would resonate - at least from the standpoint that I’m as crazy and dedicated to my pets as Martha.

But, this book is not just a book about dogs- it's really a story about love and friendship and stepping up to help those you care about, being with them and for them, and holding close the time you got to spend with them.

When Martha realizes her bull terrier, Minnie, is in mourning and needs a companion, an acquaintance puts her in touch with Carol. Carol has terminal cancer and needs to find her bull terrier, Harry, a new home before she is no longer able to care for him.

Harry has a slew of health problems, but Martha is willing to see how Harry gets along with Minnie and if the situation will work out. While she has her reservations, Harry and Minnie adjust and bond with each other- eventually.

In the process, Martha and Carol also forge a special bond- one that deepens into a valued friendship, one that has such a big impact on Martha, she decided to write this book about their friendship and the two special dogs that brought them together.

As recently as yesterday evening, I warned a Goodreads friend, who expressed interest in reading this book, that despite that precious cover, and funny title- this book was NOT a ‘cute dog’ story.

In fact, I confided to my friend that I had found the book a bit depressing although I didn’t think that was ever the author's intention.

In cases like this, when my personal preference or misgivings could alter my opinion of a book, I faced a dilemma many reviewers will relate to. It's a good book, well written, deserves a positive score- even if it was little more reality than I was able to emotionally handle at the moment.

But, I decided I owed the publisher a professional review- not a diatribe about my personal woes or losses. Everyone has had a tough year, and none of us are where we would like to be from an emotional or mental health standpoint.

To that end, I was determined to give this book the best, most positive critique possible. So, strapping on my critical thinking cap- I started writing...

Well, the more I wrote, the more I thought about the book, and the more I reflected on it, I came to realize that while the subject matter is depressing, and uncomfortable at times, it might be just the type of personal story one can draw strength from, or find comfort in...

Because-when you get right down to it, it’s a lovely, heartwarming journey about friendships- the one Minnie made with Harry- and the one between Martha and Carol- and how Martha did the right thing by both of them.

Martha, as many of you already know, is a correspondent for CBS Sunday Morning. So, it’s no surprise, really, that she can write a good story.

However, I felt she did an incredible job of introducing readers to Carol and bringing her memory alive in these pages. Naturally, she also did justice to Harry and Minnie, who played such a big role in making this friendship possible, and in highlighting the patience and love from both pet parents as they played 'matchmaker' for their beloved dogs.

So, after some introspection, I believe that overall, this book is a touching and sweet tribute to Carol, it’s an ode to friendship, to Harry and Minnie, and to the pride in pet ownership.

It’s about the special memories we create, and the time we cherish with friends and family.

Obviously, Martha’s life was enriched by Carol and Harry, but they too benefited from Martha’s dedication to them as well. This book is certainly a cathartic endeavor for Martha, I think, but there are life lessons in here we can all benefit from. 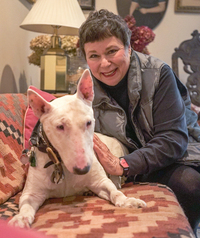 Martha Teichner has been a correspondent for “CBS Sunday Morning” since December 1993, where she’s equally adept at covering major breaking national and international news stories as she is handling in-depth cultural and arts topics. Since joining CBS News in 1977, Teichner has earned multiple national awards for her original reporting, including 11 Emmy Awards and five James Beard Foundation Awards. Teichner was also part of the team coverage of the Newtown, Conn., elementary school shooting which earned CBS News a 2014 duPont-Columbia Award. Teichner was born in Traverse City, Mich. She graduated from Wellesley College in 1969 with a bachelor’s degree in economics. She attended the University of Chicago’s Graduate School of Business Administration. Teichner resides in New York City.