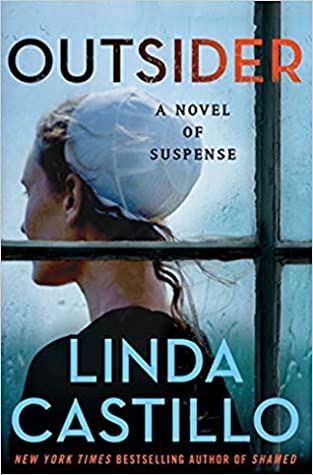 ABOUT THE BOOK:
Linda Castillo follows her instant New York Times bestseller, Shamed, with Outsider, an electrifying thriller about a woman on the run hiding among the Amish.Chief of Police Kate Burkholder's past comes back to haunt her when she receives a call from Amish widower Adam Lengacher. While enjoying a sleigh ride with his children, he discovered a car stuck in a snowdrift and an unconscious woman inside. Kate arrives at his farm and is shocked to discover the driver is a woman she hasn't seen in ten years: fellow cop Gina Colorosa.Ten years ago, Kate and Gina were best friends at the police academy, graduating together as rookies with the Columbus Division of Police. But the reunion takes an ominous turn when Kate learns Gina is wanted for killing an undercover officer. Gina claims she's innocent, that she was framed by corrupt officers who want her gone because she was about to turn them in for wrongdoing.Kate calls upon state agent John Tomasetti for help and with a blizzard bearing down, they delve into the incident. But no one wants to talk about what happened the night Gina allegedly gunned down a fellow cop. Even Tomasetti is stonewalled, his superior telling him in no uncertain terms to back off.With whisperings of corruption and the threat of rogue cops seeking revenge, Kate and Gina hunker down at Adam Lengacher's farm. As Kate gets closer to the truth, a killer lies in wait. When violence strikes, Kate must confront a reality that changes everything she thought she knew not only about friendship, but the institution to which she's devoted her life.
LISTEN TO AN EXCERPT:
MY REVIEW:

Outsider by Linda Castillo
My rating: 5 of 5 stars

Outsider by Linda Castillo is a 2020 Minotaur publication.

You can’t go wrong with this series!!

Adam, an Amish widower, and his children are out for a sleigh ride despite the blizzard conditions, when they find a car riddled with bullet holes and a woman half frozen to death. No matter what, it is the Amish way to help people, so he takes the woman back to his place.

When Kate is called in, she finds herself face to face with her former best friend, Gina, a cop who went rogue. Now she’s asking for Kate’s help, but is she trustworthy?

This is another outstanding installment in the Kate Burkholder series!

The blizzard conditions create another layer of suspense as Kate attempts to clear up the murky details about Gina’s predicament. The flashbacks to Kate’s early days as a cop, the special friendship she had with Gina, and the disillusionment that follows when Kate first found out her friend had become a dirty cop, add a tone of nostalgia and melancholy to the story. Will Kate's memories cloud her judgment now?

The Amish elements also play a key part in the story, as Adam deals with his obligations to his faith, while also wrestling with temptation from someone who had no earthly idea of the consequences he and his children would be left to face.

The building suspense kept me glued to the pages, but I never was sure what to make of the situation, who to trust, or what to really believe. The stunning twists and the final showdown is riveting, nail biting stuff!! 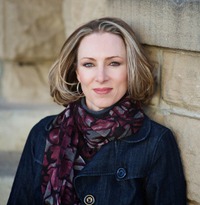 Linda Castillo is the New York Times and USA Today bestselling author of the Kate Burkholder mystery series, including Sworn to Silence which was adapted into a Lifetime Original Movie re-titled AN AMISH MURDER and starring Neve Campbell as Kate Burkholder. Castillo is the recipient of numerous industry awards, including a nomination by the International Thriller Writers for Best Hardcover Novel, the Daphne du Maurier Award of Excellence, and a nomination for the RITA. In addition to writing, Castillo's other passion is horses. She lives in Texas with her husband and is currently at work on her next book.
Posted by gpangel at 11:00 PM