FLASHBACK FRIDAY-What She Knew by Gilly MacMillan - Feature and Review 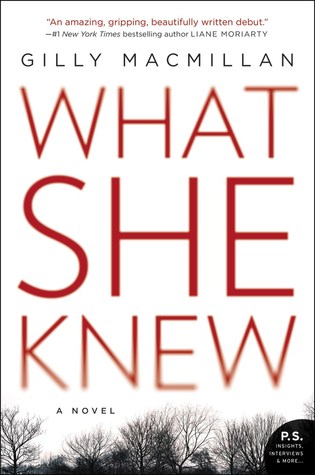 In her enthralling debut, Gilly Macmillan explores a mother’s search for her missing son, weaving a taut psychological thriller as gripping and skillful as The Girl on the Train and The Guilty One.

In a heartbeat, everything changes…

Rachel Jenner is walking in a Bristol park with her eight-year-old son, Ben, when he asks if he can run ahead. It’s an ordinary request on an ordinary Sunday afternoon, and Rachel has no reason to worry— Ben vanishes.

Police are called, search parties go out, and Rachel, already insecure after her recent divorce, feels herself coming undone. As hours and then days pass without a sign of Ben, everyone who knew him is called into question, from Rachel’s newly married ex-husband to her mother-of-the-year sister. Inevitably, media attention focuses on Rachel too, and the public’s attitude toward her begins to shift from to suspicion.

As she desperately pieces together the threadbare clues, Rachel realizes that nothing is quite as she imagined it to be, not even her own judgment. And the greatest dangers may lie not in the anonymous strangers of every parent’s nightmares, but behind the familiar smiles of those she trusts the most.

Where is Ben? The clock is ticking...

HarperAudio_US · WHAT SHE KNEW by Gilly Macmillan

What She Knew by Gilly Macmillan
My rating: 4 of 5 stars

What She Knew by Gilly Macmillian is a 2016 William Morrow Paperbacks publication.

This is one of those harrowing stories in which a child is abducted, as the clock tick along, each moment that passes makes the situation more hopeless.

In this case, Rachel Jenner’s son, Ben, is abducted while they are out walking their dog. Once the critical missing is reported, Rachel’s life is upended in ways she never could have imagined and the repercussions will haunt her for a long time to come.

This is a fine example of what happens when a case like this one catches the attention of the press. Rachel is blamed for taking her eye off her son for a short time, her family and friends endure a shocking invasion of privacy, buried secrets are revealed, and the investigation winds up in turmoil.

The story alternates between Rachel’s POV and the head investigator, DI Jim Clemo's perspective, which is an interesting set up, since Jim’s personal demons have landed him in the psychologist's office.

The novel is partly a police procedural, and follows Jim’s investigation and all the interviews conducted, the leads that come through, and the legwork involved. The toll the case takes on Jim is apparent and he becomes obsessed with finding Ben and bringing him home to his frantic mother.

The novel also highlights Rachel’s journey, as she faces public scrutiny, absorbs shocking revelations, and has all her solid relationships slip and slide away from her, while she finds strength from a few unlikely sources.

But, what stood out to me in this novel, was the portrait of a mother’s will, her strength, and incredible grit, as she faces every parent's worse nightmare. She never gives up hope, even when she’s feeling like she may shatter into a million pieces. While Rachel initially had that ‘deer in the headlights’ vibe going on, she rises to the occasion, becoming quite a fighter, learning invaluable life lessons along the way, and winning my deepest admiration.

Racing against the clock setups always have that taut, edgy feel to them, and this book is no exception to that rule, but the story is deep on many levels, examining the toll a case like this one takes on all parties involved.

The author doesn’t hold back here and the characters are flawed, damaged, and fragile, but also human and so real, they remain in your mind long after you finish the book.

Overall, this is a terrific crime drama, and mystery thriller, and again, I continue on my trend this week, by discovering another incredible new talent, who makes a strong impression with this debut novel. 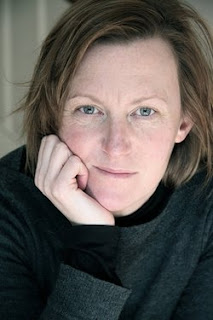 Gilly Macmillan grew up in Swindon, Wiltshire, England, and also lived in Northern California in her late teens. She worked at The Burlington Magazine and the Hayward Gallery before starting a family. Since then she’s worked as a part-time photography teacher and is a full-time mom.