MONDAY'S MUSICAL MOMENT: The Beatles A to Zed by Peter Asher- Feature and Review 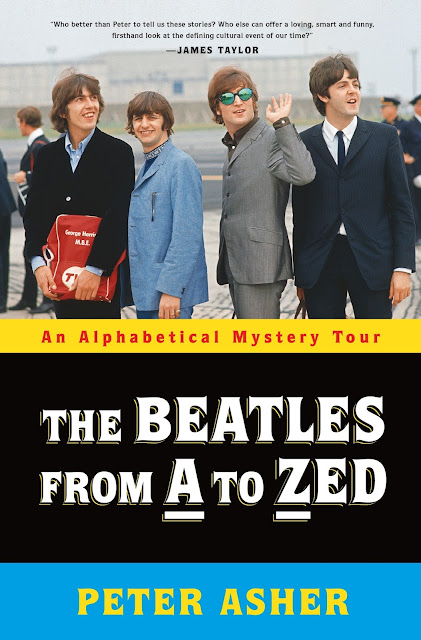 A legendary record producer and performer takes readers on an alphabetical journey of insights into the music of the Beatles and individual reminiscences of John, Paul, George, and Ringo.

Peter Asher met the Beatles in the spring of 1963, the start of a lifelong association with the band and its members. He had a front-row seat as they elevated pop music into an art form, and he was present at the creation of some of the most iconic music of our times.

Asher is also a talented musician in his own right, with a great ear for what was new and fresh. Once, when Paul McCartney wrote a song that John Lennon didn’t think was right for the Beatles, Asher asked if he could record it. “A World Without Love” became a global No. 1 hit for his duo, Peter & Gordon. A few years later Asher was asked by Paul McCartney to help start Apple Records; the first artist Asher discovered and signed up was a young American singer-songwriter named James Taylor. Before long he would be not only managing and producing Taylor but also (having left Apple and moved to Los Angeles) working with Linda Ronstadt, Neil Diamond, Robin Williams, Joni Mitchell, and Cher, among others.

The Beatles from A to Zed grows out of his popular radio program “From Me to You” on SiriusXM's The Beatles Channel, where he shares memories and insights about the Fab Four and their music. Here he weaves his reflections into a whimsical alphabetical journey that focuses not only on songs whose titles start with each letter, but also on recurrent themes in the Beatles’ music, the instruments they played, the innovations they pioneered, the artists who influenced them, the key people in their lives, and the cultural events of the time.

The Beatles from A to Zed: An Alphabetical Mystery Tour by Peter Asher
My rating: 4 of 5 stars

The Beatles A to Zed by Peter Asher is a 2019 Henry Holt & Company publication.

I know what your thinking. Another book about the Beatles? Don’t you think that by now this group has been examined in every which way one can possibly imagine? Yes, but for some reason I never grow weary of reading about the Beatles- However… it has to be a quality book, and not a rushed to market ‘cash grab’ or gossipy tell-all.

With Peter Asher’s name attached, and with the super high ratings for this one, I just couldn’t help myself- so, yes, ANOTHER Beatles book.

So, what did this new book have to offer that countless others books haven’t already rehashed ad nauseum over the years?

Well, there are plenty of interesting people and places that crop up in this book that were just on the periphery of the band, that made some contribution to the music, the sound or were influenced by the Beatles, or helped to inspire the group, spawning new ideas and creativity.

The author, whose sister once dated Paul McCartney before he met and married Linda, knew the band members personally, and continued to work with or around them for years.

Now, Asher also has his own radio show on SiriusXM, which airs on The Beatles channel, called “From Me to You.” This book stemmed from that show, and one might consider it a ‘radio’ tie in.

The format is part of what makes the book stand out from all the other Beatles books. Asher goes through the entire alphabet, listing all things pertaining to the Beatles associated with that letter. Don’t expect the obvious songs or people and places. Asher did work hard to come up with off the beaten path associations, rare tunes, events or little -known pieces of trivia to keep things interesting.
However, some letters were nearly impossible to work with and Asher’s creativity did elicit a groan or two, but he good naturedly acknowledged the occasional ‘cheating’ and some really far out there connections.

Other than that, Asher had to dig deep to avoid repeating information everyone already knows about the Beatles and worked hard to provide readers with links to the Beatles they might not have known about, or considered previously.

Still, though, at the end of the day, a lot of the information wasn't all that new- or unknown- but was merely presented to me in a different, more challenging way, so that it felt fresh.

It’s a fun book, however, and Asher had an enthusiastic approach, sprinkled with humor and inside knowledge that added a personal touch to the book.

Although the book didn't quite live up to all the high praise, for me, at least, it was a nice book to thumb through on a hot, lazy afternoon. It's an easy read, and gave me something light and pleasant to enjoy that didn’t require a great deal of concentration. Once again, I am reminded of why I love the Beatles and the myriad of ways the group influenced music and pop culture.

Peter Asher is a British guitarist, singer, manager and record producer. He came to prominence in the 1960s as a member of the pop music vocal duo Peter and Gordon before going on to a successful career as a manager and record producer. As of 2018, he tours alongside Jeremy Clyde of Chad and Jeremy in a new duo entitled Peter and Jeremy, where they perform hits from both of their respective catalogues.[ In 2019, Asher published a book The Beatles from A to Zed about his personal reminiscences about the band.
Posted by gpangel at 1:00 AM