The Queen's Secret by Karen Harper- Feature and Review 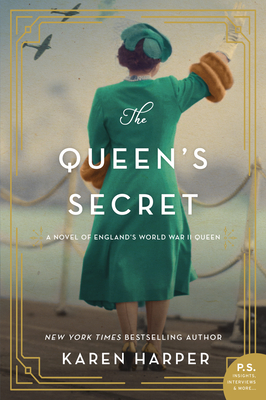 If you love Jennifer Robson or The Crown you will love New York Times bestselling author Karen Harper’s novel about Elizabeth, The Queen Mother.
1939. As the wife of the King George VI and the mother of the future queen, Elizabeth—“the queen mother”—shows a warm, smiling face to the world. But it’s no surprise that Hitler himself calls her the “Most Dangerous Woman in Europe.” For behind that soft voice and kindly demeanor is a will of steel.
Two years earlier, George was thrust onto the throne when his brother Edward abdicated, determined to marry his divorced, American mistress Mrs. Simpson. Vowing to do whatever it takes to make her husband’s reign a success, Elizabeth endears herself to the British people, and prevents the former king and his brazen bride from ever again setting foot in Buckingham Palace.
Elizabeth holds many powerful cards, she’s also hiding damaging secrets about her past and her provenance that could prove to be her undoing.
In this riveting novel of royal secrets and intrigue, Karen Harper lifts the veil on one of the world’s most fascinating families, and how its “secret weapon” of a matriarch maneuvered her way through one of the most dangerous chapters of the century.

The Queen's Secret: A Novel of England's World War II Queen by Karen Harper
My rating: 4 of 5 stars

The Queen’s Secret: A Novel of England’s World War II Queen by Karen Harper is a 2020 William Morrow Paperbacks publication.

Interesting piece of historical fiction, examining various rumors and theories about the private life of Elizabeth, The Queen Mother….

This book piqued my curiosity because it was about the Queen Mother, a member of the royal family I don’t know much about.

So, despite the oversaturation of world war II novels, which I’ve been avoiding for a long while now, I decided to give this book a try.

Although the book got off to a bit of a rocky start for me, the more I read, the more invested I became in the story. I found myself ‘Googling’ certain topics about Elizabeth I had never heard before, and was surprised to see some of these rumors have been floating around for ages.

As it turns out the queen is holding onto a couple of bombshell secrets, in this novel, secrets that have shaped her life, her marriage, and role as a mother and as a queen.

The story also highlights Elizabeth’s relationship with Churchill, her admiration for Eleanor Roosevelt, and her utter distaste for Wallis Simpson and the continual scandal she and the king’s brother wrought down upon them.

The book is fully narrated by Elizabeth so that the reader is privy to her private fears, her thoughts about the war, and how heavily her secrets weighed upon her as she lived in constant fear of having them exposed.

This is an interesting, and enlightening portrait of the queen mother and I did gain some insights into what she might have been like on a personal level. However, I must remind everyone that this is a work of fiction. Some of the scenarios explored in this book have never been proven. They are only rumors and so this book is highly speculative, in my opinion.

That said, it was an interesting take on the life of the queen and was not at all what I had been expecting.

If you enjoy historical fiction, are a fan of the royals, or like reading world war II fiction, this book might be of interest to you. 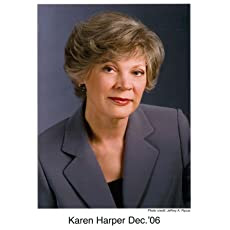 Karen Harper is the New York Times and USA TODAY bestselling author of romantic suspense and historical novels. A native Ohioan, Karen is a former high school English teacher and English-and-writing instructor at the Ohio State University. (Go Bucks!) The Harpers are avid Ohio State football fans, but they have a serious side too. They were on the 10-year committee which revamped the main library on campus. The Ohio State Library houses her author collection in Rare Books and Manuscripts.
Posted by gpangel at 1:00 AM