Murder on Trinity Place by Victoria Thompson- Feature and Review 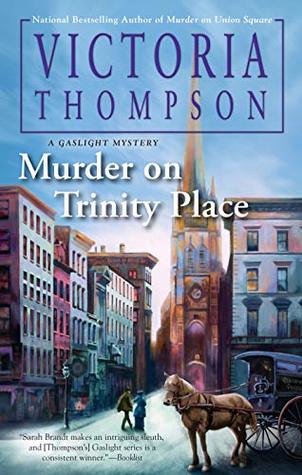 The devil's in the details when a man is found murdered near Trinity Church in the latest installment of the national bestselling Gaslight Mystery series...
The year of 1899 is drawing to a close. Frank and Sarah Malloy are getting ready to celebrate the New Year at Trinity Church when they notice Mr. Pritchard, a relative of their neighbor's behaving oddly and annoying the other revelers. Frank tries to convince Pritchard to return home with them, but the man refuses and Frank loses him in the crowd. The next morning Sarah and Frank are horrified to learn Pritchard was murdered sometime in the night, his body left on Trinity Place, the side street near the church.
The police aren't too interested in the murder, and the family that the circumstances of the death will reflect badly on Pritchard's reputation. To protect the family from scandal, Nelson asks Frank to investigate. Frank and Sarah delve into Pritchard's past and realize there may have been a deadly side to the of the new century.

Murder on Trinity Place by Victoria Thompson
My rating: 5 of 5 stars

Murder on Trinity Place by Victoria Thompson is a 2019 Berkley publication.

A perfect blend of history and mystery!

This is yet another long running series that never seems to lose its charm. In this episode, Frank and Sarah’s neighbor, Theda, Frank, after her father, a dairy owner, dies on New Year’s Eve.

Initially reluctant to take the case without giving the proper authorities the chance to investigate, it soon becomes clear the police have been paid to look the other way. So, Frank, Sarah, Maeve, and Gino embark on a most puzzling and dangerous mission to discover the truth.

I learn something new every time I read a book in this series. In this case, the story is centered around the dairy business in New York in the 1800s. Evidently, the ‘milk wars’, which I had never heard of, lead to the outlawing of ‘swill milk’- which resulted in the deaths of nearly half of the children of New York City before the age of five.

The victim in this story was a stickler for the rules and may have threatened to expose a dairy that still sold swill milk. But there are plenty of other suspects, all with a valid motive. There are several surprises and twist along the way, as well a little romantic matchmaking on Sarah’s part, which was a terrific idea for the couple in question.

As with any ongoing series, some installments are better than others. This is one of the more durable chapters in the series, which held my attention from beginning to end. If you enjoy historical mysteries, this is one of the best ones out there.

DON'T MISS THE NEXT INSTALLMENT IN VICTORIA'S GASLIGHT SERIES: 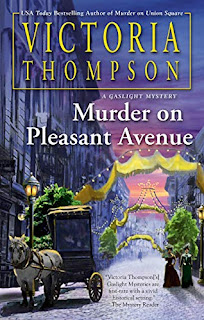 When Gino Donatelli is accused of a brutal murder, beloved sleuths Sarah and Frank Malloy have to catch a killer who is out to destroy their innocent friend's life in the latest installment of the national bestselling Gaslight mysteries.
A victim is found, brutally murdered and the police are certain they've caught the killer. Their only suspect: Gino Donatelli.
Frank and Sarah know Gino is innocent but the police have a one-track mind. Once Frank struck it rich and left their Gino with him, there has been a simmering resentment in the department. And now, someone has pulled out all the stops to make it look like Gino is the only one who could have committed the crime.
With the clock ticking and evidence mounting against their friend, Sarah and Frank will try to unravel a treacherous plot before Gino is sent up the river for good. 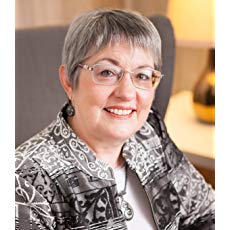