Land of Wolves by Craig Johnson- Feature and Review 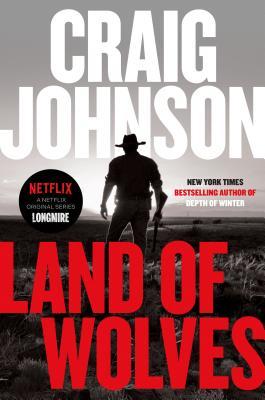 Recovering from his harrowing experiences in Mexico, Sheriff Walt Longmire returns to Absaroka County, Wyoming, to lick his wounds and try once again to maintain justice in a place with grudges that go back generations. When a shepherd is found dead, Longmire suspects it could be suicide. But the shepherd's connection to the Extepares, a powerful family of Basque ranchers with a history of violence, leads the sheriff into an intricate investigation of a possible murder.
As Walt searches for information about the shepherd, he comes across strange carvings on trees, as well as play money coupons from inside Mallo Cup candies, which he interprets as messages from his spiritual guide, Virgil White Buffalo. Longmire doesn't know how these little blue cards , but Virgil usually reaches out if a child is in danger. So when a young boy with ties to the Extepare clan arrives in town, the stakes grow even higher.
Even more complicating, a renegade wolf has been haunting the Bighorn Mountains, and the townspeople are out for blood. With both a wolf and a killer on the loose, Longmire follows a twisting trail of evidence, leading to dark and shocking conclusions.

Land of Wolves by Craig Johnson
My rating: 5 of 5 stars

Land of Wolves by Craig Johnson is a 2019 Berkley publication.

Longmire is back on familiar ground in this fifteenth installment. A complicated family situation, and the strange death of a shepherd, initially labeled as a suicide, has Longmire back at work while still recovering from the soul-crushing experience he barely survived in Mexico.

This is one of the best installments in this series I’ve read in a while. The 'arc' centered around Walt’s trip to Mexico to rescue his daughter, was very dark and gritty. I felt I was quite patient with Johnson’s off the beaten path meanderings. However, I was beyond ready to get back to Absaroka County, Wyoming!!

This mystery is interesting, and complex, as are the characterizations and motives. The wolf, and the symbolic represents, is very befitting of this series, which has always had a spiritual undertone. The story is also back on procedural grounds and the guessing game is as good as it gets.

“In my culture, animals are celebrated as beautiful, mysterious, powerful, dangerous, and benevolent. There was a period, before we lost the ability to listen, when the animals took pity on us, protected and taught us to the point where they became human in times of need.

Johnson does set a different tone here, however, as Longmire’s previous escapades are not a distant memory, just yet. Walt presents with some classic PTSD symptoms and is often in physical discomfort. As though realizing, and accepting his limitations, readers will probably pick up on an unfamiliar fragility about Walt, but the story has an edge many of the pre-Mexico stories don’t.

I wonder if Johnson is signally readers that the series may progress into a different sort of crime story, removed from the usual cozy-like atmosphere of old. There are still a few laugh out loud moments and our favorite characters are back in their element, as well, which was so nice to see.

I thoroughly enjoyed this latest installment in the series. Although the tone is a bit gravelly, it was still a comforting return home, so to speak. Overall, this was a stellar addition to the series and I’m once again feeling very excited about the next installment! 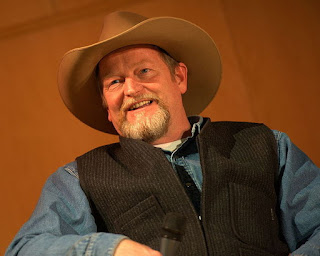 Craig Johnson is the New York Times bestselling author of twelve Walt Longmire mystery novels, which are the basis for Longmire, the hit Netflix original drama. The Cold Dish won Le Prix du Polar Nouvel Observateur/Bibliobs. Death Without Company, the Wyoming Historical Association's Book of the Year, won France's Le Prix 813, and Another Man's Moccasins was the Western Writers of America's Spur Award Winner and the Mountains & Plains Book of the Year. The Dark Horse, the fifth in the series, was a Publishers Weekly Best Book of the Year and Junkyard Dogs won The Watson Award for a mystery novel with the best sidekick. Hell Is Empty, selected by Library Journal as the Best Mystery of the Year, was a New York Times , as was As the Crow Flies, which won the Rocky for the best crime novel typifying the western United States. A Serpent's Tooth opened as a New York Times bestseller as did Any Other Wait for Signs, Johnson's collection of short stories. Spirit of Steamboat was selected by the State Library as the inaugural One Book Wyoming and included visits to sixty-three libraries. Johnson lives in Ucross, Wyoming, population twenty-five.
Posted by gpangel at 1:00 AM