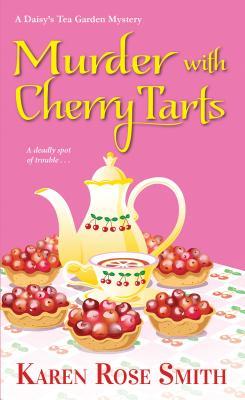 Daisy's worried one of her employees at Daisy's Tea Garden may be in a spot of trouble. Lately Karina's been loading up on soup and second-day baked goods at the end of her shift--and while the shop's scrumptious treats may be hard to resist, Daisy suspects there's more going on, especially since Karina has been seen hanging out in a rundown part of Willow Creek.

Planning her own daughter's wedding is enough to keep her busy, but Daisy can't help feeling a protective maternal instinct--and an instinct to investigate. It turns out Karina has been helping a down-on-his luck single dad who's been making ends meet--barely--by selling antiques at a place called Pirated Treasures.

But when an employee at the antiques store is bludgeoned to death with a marble rolling pin, Karina's new friend is suspect number one. Though the motives are muddy and steeped in intrigue, Daisy is more than determined to flush the real killer out.

Murder with Cherry Tarts by Karen Rose Smith
My rating: 5 of 5 stars

Murder with Cherry Tarts by Karen Rose Smith is a 2019 Kensington publication.

Daisy is back and life is as complicated as ever! Vi’s emotions are all over the place, Jazzi is still trying to find a place in her biological mother’s life, while Daisy is concerned about one of her employees who is suddenly asking to take home all day -old food and was spotted out in a dangerous part of town.

When Daisy and her new beau discover the truth, they rise to the occasion, helping a single father named Kevin, and his young daughter, who have fallen on hard times. However, when an antiques dealer is murdered, Kevin becomes the prime suspect. Naturally, Daisy feels compelled to investigate the situation, while helping Kevin navigate the inevitable and pointed interrogations aimed at coaxing a confession from him.

This fourth installment in the Daisy’s Tea Garden series, boasts one of the most complex plots we’ve seen to date. It’s a very clever, , mystery that will keep you guessing from start to finish.

Right away, I picked up on an underlying sense of foreboding, as shady dealings and puzzling intrigue abound. Daisy’s experience with solving murders has emboldened her just a little, and she is less intimidated by official law enforcement agents, especially those with an ax to grind.

Naturally, Daisy’s personal life is almost as big of a draw as the mystery, and there’s plenty of drama to go around. Jonas was particularly funny in this book when he gets bitten by the green-eyed monster. By the book’s end, progress is made in some places, while other relationship woes still need more work and more time.

Overall, the family drama, romance, and mystery elements are very well-balanced and perfectly executed. This is one the strongest additions to the series to date!! Keep ‘ coming! 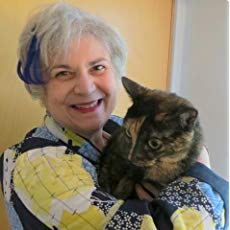 Award-winning author Karen Rose Smith was born in Pennsylvania. Although she was an only child, she remembers the bonds of an extended family. Family is a strong theme in her books and she suspects her childhood memories are the reason.
In college, Karen began writing poetry and also met her husband to be. They both began married life as teachers, but when their son was born, Karen decided to try her hand at a home-decorating business.
She returned to teaching for a changes in her life led her to writing relationship novels. Now she writes romances as well as mysteries full time. Her first book was published in 1992; her 80th novel will be published in 2013. A winner of New Jersey's Golden Leaf Award in Short Contemporary Romance, Colorado Romance Writers Award Of Excellence for short contemporary, as well as the Phoenix Desert Rose Chapter's Golden Quill for Traditional Romance, she has also been honored with Cataromance.com's award for Best Special Edition and Washington Romance Writers Career Achievement Award. Her romances have made both the USA TODAY list and the Amazon Romance and Contemporary Romance Bestseller lists.
She has written for Meteor/Kismet, Kensington, Silhouette and Harlequin. Readers can contact Karen through her website, on Facebook (Karen Rose ) and on Twitter @ Karenrosesmith. They can also follow her monthly e-zine IN TOUCH with KAREN ROSE SMITH which has the latest news about her books, recipes and contests.
Posted by gpangel at 1:00 AM