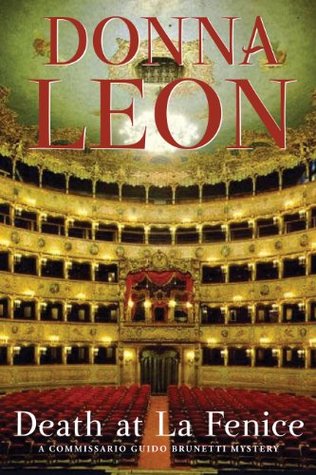 Death at La Fenice is the first novel in Donna Leon’s internationally best-selling Commissario Guido Brunetti series. During intermission at the famed La Fenice opera house in Venice, a notoriously difficult conductor is poisoned, and suspects abound. Brunetti, a native Venetian, sets out to unravel the mystery behind the high-profile murder. To do calls on his knowledge of Venice, its culture, and its dirty politics. Revenge, corruption, and even Italian cuisine play a role. The novel that started it all, Death at La Fenice is an entrancing mystery, rich in atmosphere.

Death at La Fenice by Donna Leon
My rating: 4 of 5 stars

Death at La Fenice by Donna Leon is a 2012 Grove Press publication. Originally published in 1992)

This is the first book in the long running Commissario Brunetti series. I’ve been curious about Donna Leon for ages but have never gotten around to sampling any of her work. This book is available in the Kindle Unlimited program, at the moment, giving me a great excuse to finally see for myself why this series has endured.

When a world- renowned musical conductor is poisoned during intermission at the famed La Fenice opera house, it sends shock waves through Venice. Naturally, the police are under tremendous pressure to find the killer. Guido Brunetti is definitely the right man for the job, but he refuses to allow his boss or the press to force him into doing a rush job with the investigation.

As it happens the conductor was not loved by everyone in his orchestra, or even by those closest to him, which means the suspect list is lengthy and Brunetti will have to go through a tedious process of elimination. As Brunetti investigates, the Venetian architecture, and scenery in glorious detail.

Although the story shows its age in some ways, I found the mystery to be a solid whodunit and the characters, especially Brunetti and his wife, quite intriguing. Naturally, as one can guess, I really loved the Italian setting and the author’s descriptions of Venice, which gave the story a unique atmosphere.

I may not read this series in exact order, but I do plan on adding more Brunetti mysteries into my TBR list!

Overall, a nice introduction to Donna Leon and the Commissario Brunetti series!

Donna Leon (born September 29, 1942, in Montclair, New Jersey) is an American author of a series of crime novels set in Venice and featuring the fictional hero Commissario Guido Brunetti.Donna Leon has lived in Venice for over twenty-five years. She has worked as a lecturer in English Literature for the University of Maryland University College - Europe (UMUC-Europe) in Italy, then as a Professor from 1981 to 1999 at the military base Vicenza (Italy) and a writer.Her crime novels are all situated in or near Venice. They are written in English and translated into many foreign languages, although not, by her request, into Italian. Her ninth Brunetti novel, Friends in High Places, won the Crime Writers' Association Silver Dagger in 2000.
Posted by gpangel at 1:00 AM