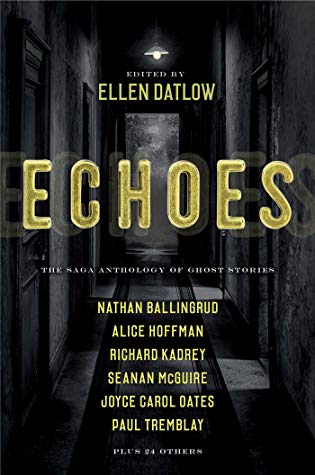 Echoes: The Saga Anthology of Ghost Stories by Ellen Datlow
My rating: 4 of 5 stars

Echoes: The Saga Anthology of Ghost Stories by Ellen Datlow is a 2019 a Gallery / Saga Press publication.

Halloween is just around the corner and of course it’s this time of the year when I usually find myself in the mood for a good old- fashioned ghost story. Yet, a good ghost story is hard to find sometimes. So, when I found this anthology in my cloud library, I checked it out on the spot.

I was even more excited by the introduction, in which famed anthology editor, Ellen Datlow, commiserated with those of us who are often disappointed by ‘ghost story’ compilations, which later turn out to be a catchall for anything that might fall into the realm of horror or the paranormal, but aren't exactly what one would call an authentic ghost story.

So, I eagerly dived in, only to find that once again, a fair amount of these short stories, aren’t ghost stories, as I might define them. However, nearly all of them are weird tales or atmospheric mind-benders.

I am not familiar with all the participating authors, but regular readers of horror novels might be.

Paul Trembly gets the ball rolling, but other familiar names like Alice Hoffman and Joyce Carol Oates also contribute solid stories to this collection.

“Must be This Tall to Ride” by Seanan McGuire is one of the shortest stories included but is one of the best. Something about carnivals are always spooky!

The July Girls felt like more of a traditional ghost tale- which are my favorites, if I’m being honest. I also enjoyed “The Other Woman” by Alice Hoffman.

As with many anthologies, especially compilations as large as this one, there are a few stories that left me scratching my head in confusion, or seemed to end too abruptly. However, most are contemporary, imaginative, and several were truly eerie, providing the chills and thrills a good ghost story should.

If you are looking for a few supernatural flavored stories that you haven’t read or heard a thousand times before, this collection of original stories is one you’ll want to add to your Halloween reading list!! 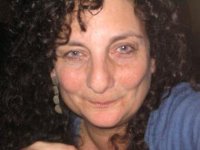 Ellen Datlow has been an award-winning editor of short science fiction, fantasy, and horror for over years.
She is editor of the Best Horror of the Year and has edited or co-edited a large number of award-winning original anthologies. Her most recent are Supernatural Noir, Naked City, Blood and Other Cravings, The Beastly Bride, Teeth, Trolls Eye View, and After (the last three with Terri Windling).
She is the winner of multiple awards for her editing, including the World Fantasy Award, Locus Award, Hugo Award, International Horror Guild Award, the Shirley Jackson Award, and the Bram Stoker Award. She was named recipient of the 2007 Karl Edward Wagner Award, given at the British Fantasy Convention for "outstanding contribution to the genre." And has been given the Lifetime Achievement Award by the Horror Writers Association.
She co-hosts the popular Fantastic Fiction at KGB Bar series of readings in New York City where she lives.
Posted by gpangel at 1:00 AM