That Old Scoundrel Death by Bill Crider- Feature and Review 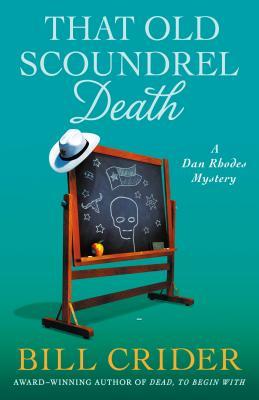 Beloved Texas Sheriff Dan Rhodes is back with his final murder case in That Old Scoundrel Death.
When a man is run off the road by a thug with a snake tattooed around his neck, Sheriff Dan Rhodes knows it's his duty to stop and help out. The grateful victim gives his name as Cal Stinson, on his way to the nearby town of Thurston to take a look at the old school building before the city tears it down.
The next day, Cal Stinson turns up again. Only this time, he's dead.
His body is found in the dilapidated school that's about to be razed, and the woman who Cal onto the premises claims he gave his name as Bruce Wayne. Whoever is he is, he was shot in the back of the head, and a piece of chalk lies inches away from his hand, under a line on the chalkboard, his last words unfinished.
Between not-so-bright hoodlums who can't seem to stay on the right side of the law, powerful families in town who are ready to go to battle over whether the old school should come down, and trying futilely to get private detective Seepy Benton to stop making mountains of mole hills, Sheriff Rhodes is beginning to wonder if retirement might be as good as it sounds.

That Old Scoundrel Death by Bill Crider
My rating: 5 of 5 stars

That Old Scoundrel Death by Bill Crider is a 2019 Minotaur publication.

Dueling , a decayed school building, his deputies, and the mayor are giving Sheriff Dan Rhodes fits. But when a body is found in the abandoned school, the chameleon victim places three prominent families under suspicion, all of them pointing fingers at the other. The sheriff has his work cut out for him trying to find out who the victim is, and why someone would want him dead.

The deeper he digs the more explosive the case becomes. Not only that, it happens to be an election year and the good sheriff is pondering his future. Should he seek re-election or hang up his badge?

This series never fails to charm me. While the stories are loaded with hysterical banter and odd duck characters, the mystery is always a top-notch whodunit. I climbed aboard this series a bit late in the game and now I’m glad I did, as there are still many books I haven’t read.

That means I won’t really have to say good-bye to the sheriff for a good long while. It is rare for a long-running series to stay fresh, and I’m sure there are a few stale chapters back there somewhere, but I’m thrilled this series went out on a high note. I still think of Bill from time to time and am so happy I discovered this quaint mystery series.

He received an M.A.  the University of North Texas, in Denton. Later, he taught English at Howard Payne University for twelve years, before earning a Ph.D. the Univeristy of Texas at Austin, where he wrote a dissertation  on the Hardboiled detective novel. He then moved to Alvin, Texas with his wife, where he was the Chair of the Division of English and Fine Arts at Alvin Community College. He retired in August 2002 to become a full-time writer.
He was the author of the Professor Sally Good and the Carl Burns mysteries, the Sheriff Dan Rhodes series, the Truman Smith P.I. , and wrote three books in the Stone: M.I.A Hunter series under the pseudonym "Jack Buchanan". He was also the writer of several westerns and horror novels.